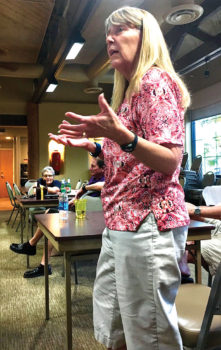 Linnea Boaz, an Ally, shares with the group.

At the July GLAAS meeting, Social Chair Shellie Pierce facilitated an interactive and, at times, emotional conversation on the topic of coming out as a professional. Shellie opened the program by sharing several relevant facts and statistics designed to initiate a discussion.

For example, did you know that Arizona ranks near the bottom of all 50 states in affording legal protections for LGBT people? Also, Arizona offers no formal programs or protections for its LGBT youth. This means that the state has a high potential for increasing rates of suicide and other problems.

During the evening, members of GLAAS, which include lesbian, gay and their straight allies, shared their stories. Although several members shared that their work experience was not affected by their sexuality, the majority of our LGBT members shared sad memories of harassment and prejudice in the workplace. Several Allies shared that they had good friends who were negatively impacted at work because of their sexual orientation. All members agreed that it was important not to be complicit when they observe a situation where an LGBT person is harassed or subject to prejudice.

Looking ahead, August will be an outdoor social for GLAAS members at a private home. The Board is planning out the fall schedule which will be topped off by our annual December Holiday Party.