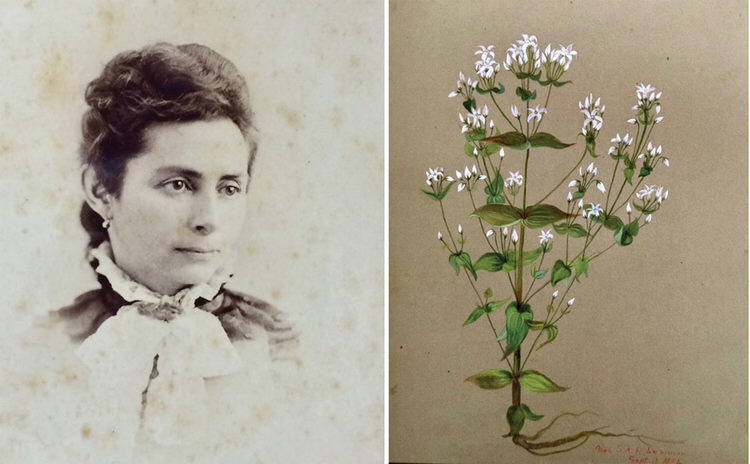 Sara Plummer Lemmon and her painting

Mount Lemmon is named after Sara Plummer Lemmon, a forgotten botanist who was rediscovered by Wynne Brown, a writer, editor, illustrator, and the speaker at the May SaddleBrooke Nature Club meeting.

Sara Plummer Lemmon lived from 1836 to 1908. Her husband, whom she married when she was 44, was John Lemmon. In addition to Mount Lemmon, Sara and John had many plants named for them, both separately and together, using the names Plummer (Sara’s maiden name) and Lemmon (the couple’s married name). Examples are Acacia lemmonii and Stevia plummerae.

Sara was born in New Gloucester, Maine, and was educated in the Female College of Worcester. She later moved to New York and studied at Cooper Union where she studied chemistry and physics and taught calisthenics.

Sara served as a nurse in the Civil War. She almost died of the measles in 1868 to 1869, and she moved to Santa Barbara, Calif., in 1869. There she felt there was a lack of culture, so she established a library. She held cultural gatherings with lectures and also art exhibits.

While walking in Santa Barbara, Sara acquired an interest in botany, and her paintings thereafter were botanical illustrations. While giving a lecture, Sara met John Gill Lemmon, a Civil War veteran and former Andersonville prisoner during the war. He was also a self-taught botanist.

The two of them came to Arizona, and after several tries, they climbed to the peak of Mount Lemmon. During their stay in Arizona, they found and documented many new plants, and Sara painted most of their finds. It is estimated that they documented about three percent of the newfound plants in Arizona.

The speaker at our meeting, Wynne Brown, found hundreds of letters written by Sara Plummer Lemmon and found many of her paintings. All are being kept, and some are being restored.

Much of what is known about Sara is in Wynne Brown’s book, The Forgotten Botanist: Sara Plummer Brown’s Life of Science and Art.

More about our speaker can be found at [email protected]

More about the SaddleBrooke Nature Club can be found at saddlebrookenatureclub.org.