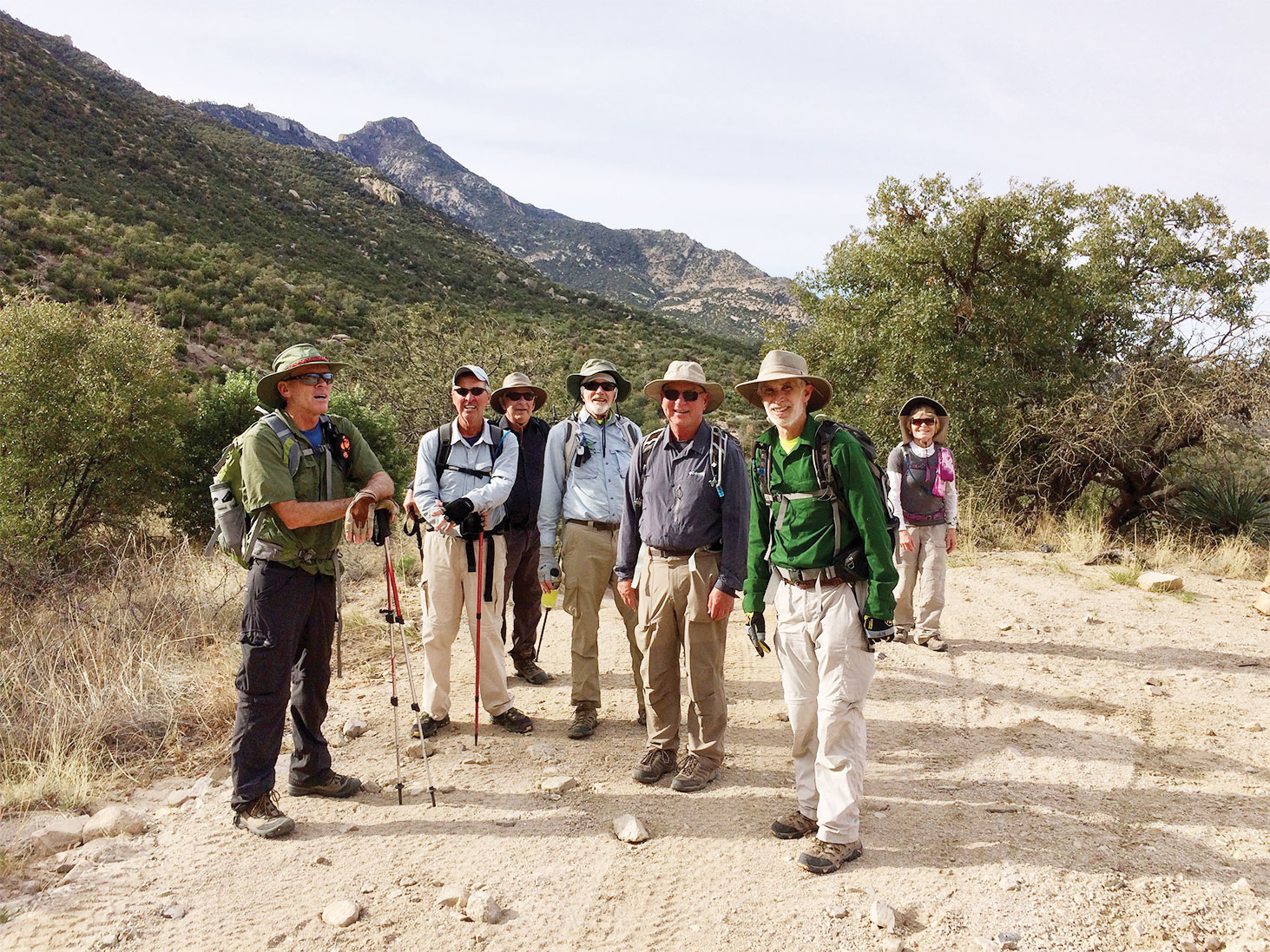 Above SaddleBrooke, in the Santa Catalina Mountains, is a rock formation on the Samaniego Ridge called Mule Ears. From most of our community it looks like just another rock formation, but from the 16th or 17th hole on the Preserve golf course, one can see that there are, in fact, two separate upward jutting rocks. If you look at them through your binoculars, you can see why they are called Mule Ears.

On March 16 eight adventurous hikers from SaddleBrooke, led by Randy Park, set out on foot from Unit 21 with the goal of seeing the formation up close. Our route took us down a concrete drainage ditch, across Canada del Oro, along cow paths, and up Charleaux Gap Road. Five plus miles and two and a quarter hours later, we reached Charleaux Gap which lies at a 5000-foot elevation, almost 2000 feet higher than our start. We had three plus miles to go along with another 2000 feet of elevation.

Our journey at that point switched from hiking on a 4×4 road to a single-track trail. The next mile was not only steep, but had extensive washouts, probably from summer monsoon rains. The hiking poles were definitely put to good use. This route took us on the east side of the ridge with views of Oracle Ridge, Red Ridge, Reef of Rocks and the town of Oracle. Just when the trail started to level out, the path become overwhelmed by thorny and scratchy bushes. One hiker joked that the trail should be renamed to Trail of 1000 Scratches. Thanks to the overgrown nature of the route, we had to stop numerous times to look for the trail as it would temporarily disappear. As we approached our destination, we entered a Ponderosa Pines forest for which everyone was thankful.

The last 100 yards was a mixture of dense shrubbery and boulders that required scrambling. Shortly before noon, we reached our end point, which afforded us a closeup view of Mule Ears and fantastic views in all directions including SaddleBrooke, Picacho Peak, Oro Valley and much more.

For most of the group this was a new hike, but for Phil McNamee and Tom Geiger, it was a repeat of a hike they had done many years before. They both agreed that the trail conditions had changed dramatically, and not for the better. At 4:00 p.m., when we returned to SaddleBrooke, we looked at our GPS gizmos and realized we had just hiked over 17 miles, with 4500 of accumulated elevation gain.