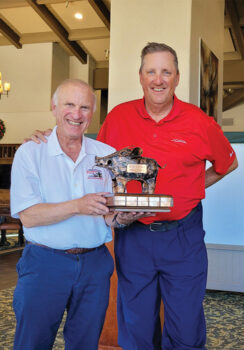 The Javelina Cup was played on Jan. 6 at the MountainView course and on Jan. 7 at SaddleBrooke One’s courses.

For a record ninth year in a row, the golfers from MPMGA again prevailed to retain the cup, but it was a tough struggle. After playing at their home course on day one, the MPMGA players established a slim 31-point lead going into day two, where 450 points were available, and SMGA was heading into their home courses. After a fun and competitive battle, SMGA took the day by a slim eight points, not enough to overcome the day-one lead by their opponents. The final score was 461.5 for MPMGA and 438.5 for SMGA.

Congratulations go to the top performers on both clubs. For the victorious MPMGA team, Kelly Paxton and Tony Cardillo garnered 22.5 points out of a possible 36. The overall champ from both clubs was the team of Darryl Henderson and Bruce Twining, with a whopping 25.5 points over the two days.

Afterwards, everyone gathered at the Vistas Restaurant to enjoy a terrific lunch and share stories about the shots that got away. A great time for two communities enjoying an annual, friendly rivalry.