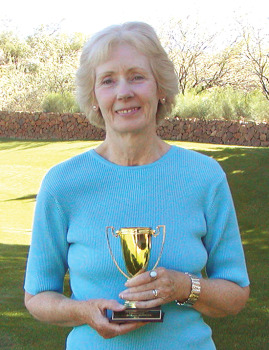 The MountainView/Preserve Lady Niners held their annual President’s Cup Tournament on November 3 and 4. With three flights, and using net scores, everyone had an opportunity to do well in this fun tournament. Mike Jahaske and Ken Steinke were on hand to complete the scoring and announce the winners. The overall winner, with a net score of 67, was Deb Bunker. Flight 1 winners were Susan Elliott (with a net score of 75), Kathy Coffman 78 and Joyce Sutay 79. Flight 2 winners: Karyle Steele 8, Raye Cobb 82 and Diane Creager 84; Flight 3: Pat Wells 68, Marilyn Horn 73 and Karel Titone 85.

Also to be celebrated were the following: Jenny Rink scored a birdie; Karen Koch, Jenny Rink, Diane Creager and Rita Smith all had chip-ins; and Deb Bunker, Marilyn Horn, Susan Elliott and Joyce Sutay all scored under 50 in a nine hole round. Congratulations to all!

Applications are now being accepted for 2015 membership in the MPLN. All those interested may call Membership Chair Rita Smith at 818-9239.