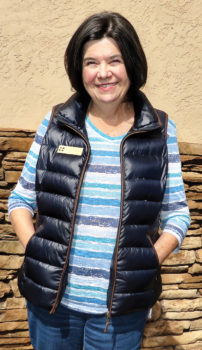 Sue Bush
Congratulations to Virginia Brier who became a Life Master at the Palm Springs Regional Tournament in December. Virginia started playing five years ago with her friend, Linda Grissom. They took lessons from Barbara Rosenthal and one day in 2014 Barbara convinced her to attend the Las Vegas National Tournament that July. Virginia went by her herself with less than five master points! She easily met people at the partnership desk and subsequently played at other national tournaments with a player from Florida who she met there.
Last summer Virginia and Linda attended the Atlanta National Tournament and played four sessions in one day including a ZIP knockout that began at 11:30 at night! They decided that they would never do that again but liked pushing each other’s limits. So, it is fitting that she was playing with Linda in Palm Springs when she got those final points for life master. Hard work pays off; good job, Virginia.
On a sad note we will all miss Tom Baker’s wonderful smile and corny jokes at the Friday bridge games. Tom, who passed away on February 20, played regularly on Fridays with partner Dick Quigg. Our condolences to his wife of 52 years, Marilyn.
Congratulations to first place winners in February at MountainView: Joy Riekers, Lorretta Wood, Bob Murray, Peter Godfrey, Roy Aiken, Eric Vonderheld, John and Arlene Mayfield, Bob Brussel, Sarah Baumann and Betty Meyer.
Congratulations also to all the many bridge players from SaddleBrooke who participated in the Winter Tucson Regional Tournament. Too many masterpoint winners to name but Barbara Sullenger was top SaddleBrooke winner with 26.76 points, Dick Quigg second with 25.44 points and Bob Brussel was third with 24.62.
The MountainView game is held at the Catalina Room beside the Mesquite Grill on Tuesday and Friday at 1:00 p.m. Check the website for possible changes. If you need a partner contact Jo Ann Aiken at
520-256-2702 or [email protected]