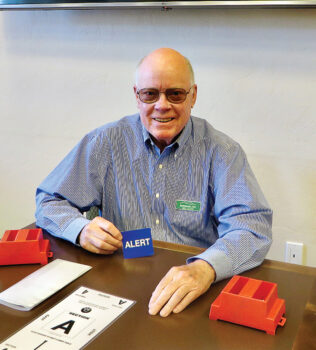 Bill Keese, who moved to SaddleBrooke in 2019 with his wife, Aggie, has become a regular player at The MountainView Bridge Club. The couple moved here from Graeagle, California, a small community in the Sierras, sixty miles north of Lake Tahoe where they lived for over 30 years.

Bill had a long career as a Legislative Advocate in California, ending by serving eight years as the chairman of the California Energy Commission. Aggie was the founding executive director of the California Solar Energy Association.

They were both active in the community – Aggie serving as chair of the Hospital Board and Bill as chair of the Community Service District and on the local Land Trust Board.

For the last 12 years they have been snowbirds spending four to five months at the Palm Desert Tennis Club. When the club limited pickleball to three days a week in the afternoon, they searched for a community with tennis, pickleball, bridge and no snow! This brought them to SaddleBrooke.

Bill’s parents introduced him and his younger brothers to many card games in Wisconsin where they grew up. His parents belonged to two bridge groups and, at age 12, Bill became the fill-in for any absentees, partnering with his father. The only instruction he recalls receiving was that if his father bid three no-trump, Pass! He played some competitive bridge with his brothers and resumed playing competitively after retirement in Palm Desert. Now fully retired, Bill looks forward to an active SaddleBrooke life that includes bridge and pickleball.

Mark your calendars for the upcoming Tucson Winter Regional tournament, March 2-8, at the Tucson Expo Center, 3750 E. Irvington Road. Gold rush pairs, bracketed round robin games, Swiss team games, and stratified open pairs will be featured all week with a bracketed Swiss team event on Sunday, March 8 that will include lunch. The tournament will have free coffee all day, free candy, morning lox and bagels, giveaways and lectures Tuesday-Friday at 1 p.m. Morning games begin at 9:30 a.m. and afternoon games at 2:00 p.m. For more information, go to www.playsouthernazbridge.com.

The MountainView game is held at the Catalina Room beside the Mesquite Grill on Tuesday and Friday at 1:30 p.m. Check the website at www.bridgewebs.com/mountainview for possible changes. If you need a partner contact Jo Ann Aiken at 520-256-2702 or [email protected]