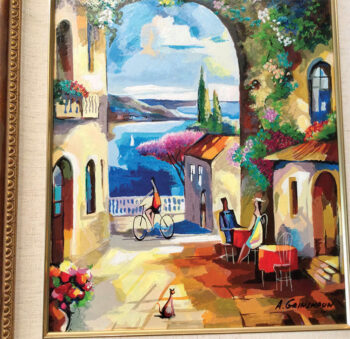 We can picture ourselves traveling and sitting at a cafe after playing bridge.

Mother’s Day was more subdued this year, since many of us chose not to have large gatherings. Instead, we might look forward to traveling this summer, hoping more people will be vaccinated and sightseeing will resume.

Luckily, we have online bridge games to occupy us every day. They stimulate those brain cells and give us challenges. We can socialize with partners and opponents briefly through the chat line and not have to deal with facial expressions or body language.

The Bridge Bulletin always gives advice on various topics. Lynn Berg recently discussed the Stayman convention. She gave an example of bidding Stayman when a partner opens one NT and you have five spades, four hearts, and less than eight HCPs. Whatever partner bids, you then pass. Another example is when you have no clubs, or even one club, four of each major, and five diamonds. It’s called Garbage Stayman. Again, pass with less than eight points.

She goes on to give examples when opponents interfere. They bid two clubs, you double to say they stole your bid. If they bid higher than two clubs, you can cue bid three clubs to show a Stayman bid. However, you should have more than eight points, since a partner has to bid at the three level.

It’s something to discuss with your partner, so each of you knows what to expect.

Three-level preempts depend on vulnerability. There, you can be more frisky.

The MountainView Bridge Club will have in-person games when SaddleBrooke opens the club rooms and the club president, JoAnn Aiken, thinks it’s wise.