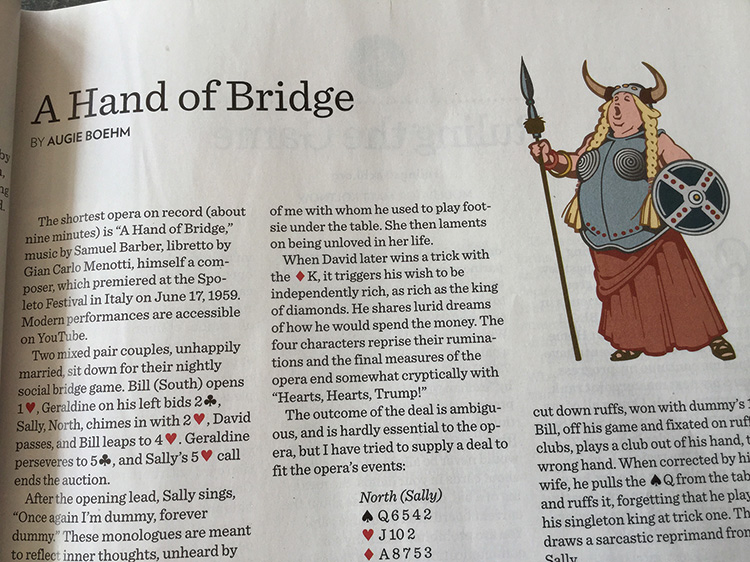 Can an opera capture the drama of couples playing bridge? Is the wife really “the dummy?”

The American Contract Bridge League (ACBL) had special Silver Point games through BridgeBaseOnline at the end of July and beginning of August. Those points may have appealed to players aiming to become Life Masters. For those past that level, the competition might have attracted others.

Tucson clubs continue to have virtual competitive games mornings for non-life masters and afternoons with open games on BridgeBaseOnline (BBO). Some of the $5 fee goes back to the clubs. There are still free casual games, too.

The July issue of “Bridge Bulletin” had some advice for “newer players.”

Adam Parrish suggested, when a partner opens two clubs, the responder bids two hearts with a bust hand. Responder would bid 2 NT with hearts and values. If responder forgets to bid 2NT (as I’ve done), he can bid two diamonds, then two hearts.

Parrish says this has the “advantage of setting up an immediate game force when the responder bids two diamonds.” He then describes a relay which, he admits, is complicated.

The “two-heart bust” bid has become quite popular in the Tucson community.

Another contributor to the magazine, August Boehm, discussed responder with a weak hand. He described three hands, each with two high card points. Partner doubles opponent’s bid three times. Boehm said, with length in a suit (other than the one bid), the responder should bid, not pass. For example, opponents have bid hearts three times and your partner has doubled each time.

We can learn something valuable from these articles.

Meanwhile, we can play bridge online wearing our pajamas, munching on snacks, and relaxing.

Life goes on, as long as we keep safe.

Eventually, the Mountainview club will open again, but we’re better off being cautious.

Check our website at www.Bridgewebs.com/mountainview for opening days and times.