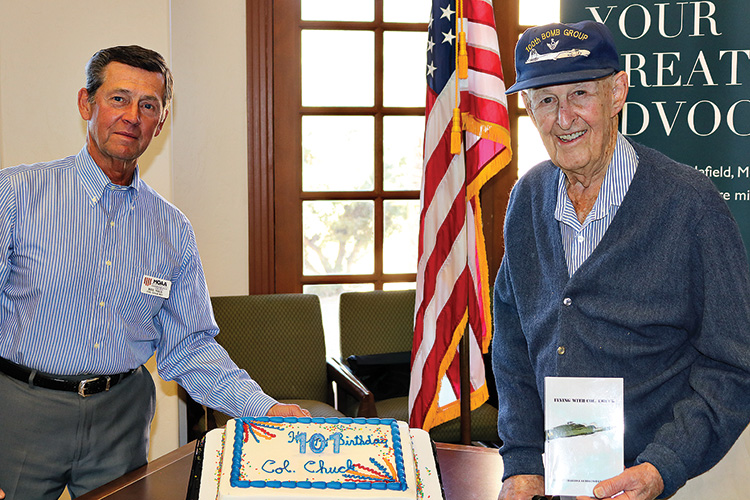 The Catalina Chapter of the Military Officers Association of America (MOAA) held their regular monthly meeting on Saturday, Feb. 15, at the MountainView Clubhouse. Col. Bill Nagy presided over the meeting.

In attendance was our guest speaker, Emerson T. Knowles, formerly of Cincinnati, Ohio. Now, he and his wife, Peggy, are 14-year residents of SaddleBrooke. They have two adult daughters, Libby and Courtney, and a son-in-law, Dan. They have three granddaughters ages 11, 8, and 3.

Emerson’s education is from Massachusetts Institute of Technology (MIT). He works as a senior VP for investments for Bank of America/Merrill Lynch and has a 41-year career with them in investment management. He enjoys traveling, playing soccer, hiking, trail running, and writing. He is active in veteran support in Team RWB and Honor Flight, education, and environmental causes.

Those gathered for the meeting were delighted and moved by his talk entitled “A Force For Good.” The program tracks the American legacy and impact of our Constitution and how it changed the entire world’s view of what the military is and how it is a force for good as opposed to its historical role as the agent of the elite. A particular interest is placed on lessons learned from WWI and how they were not repeated after WWII. That foundation is set to see how the U S. military is an unmatched force for good in the world today.

In summation, he said that in the history of armies, if you punish and vanquish the defeated, you cause another war. However, if there is no fear or want, they will not go to war again. We are not just a powerful force, but we are a force for good.

The chapter had a special occasion to celebrate the 101st birthday of our member, Col. Charles “Chuck” GuteKunst. Chuck is a WWII veteran and a retired member of the United States Air Force. During WWII, Chuck flew 35 missions over Germany, five of them over Berlin. He received three Legion of Merit awards, the Distinguished Flying Cross, seven Air Medals, and multiple foreign awards from Britain, France, and Russia. He resides in SaddleBrooke. Chuck is a life member of MOAA and attends each and every meeting. He has written his memoirs in a book entitled Flying with Col. Chuck. We celebrated his special day with a cake in his honor.

The Catalina Mountains Satellite Chapter of MOAA is part of Tucson MOAA and encompasses northwest Tucson to include Catalina, Oracle, parts of Oro Valley and Marana, SaddleBrooke, and Sun City. For additional information, contact Col. Bill Nagy at [email protected] or visit http://www.tucsonmoaa.com.

The Military Officers Association of America (MOAA) is a non-profit veteran’s association dedicated to maintaining a strong national defense and preserving the earned entitlements of members of the uniformed services and their families and survivors.