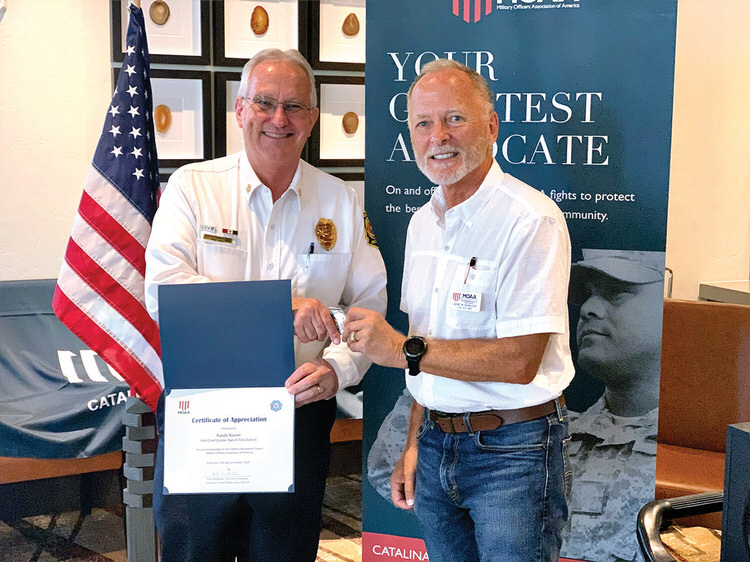 The Catalina Mountain Chapter (CMC) of the Military Officers Association of America (MOAA) held its most recent meeting on Oct. 15 at SaddleBrooke Ranch. The meeting began with a business session presided over by COL Kurt McMillen, first vice president, during which members were updated on the chapter’s current and upcoming activities.

He also talked about the cooperation between the Robson Companies and the fire district to convert a model home at SaddleBrooke Ranch into a temporary fire station so the Insurance Services Office (ISO) would give the community a high enough fire protection rating so that insurance companies would be willing to offer fire insurance policies to SaddleBrooke Ranch homeowners.

The next regular CMSC meeting will be held on Saturday, Nov. 19, at the Grill at SaddleBrooke Ranch. Please note the beginning time for this meeting will be at noon instead of the normal 11:30 a.m. starting time.

The presenter will be Harvey Ferguson who served as an infantry soldier with the U.S. Army’s Third Infantry Division in Germany during the cold war period. The Third Infantry Division was one of the major deterrents against any thoughts of aggression by the USSR. Using his G.I. Bill benefits, Harvey obtained his bachelor’s degree and began his 33-year career with the Seattle Police Department.

In 2015, Harvey’s biography of General Lucian Truscott, The Last Cavalryman, was published. This work will serve as the basis for his presentation, which will follow General Truscott from his boyhood through the post-World War I period, into his commands during World War II, and then into the Central Intelligence Agency.

If you are interested in joining our organization, please contact Membership Chair LTJG David Bull by email at [email protected] or by telephone at 520-825-0604.

The Military Officers Association of America is a nonprofit veteran’s organization dedicated to maintaining a strong national defense and preserving the earned entitlements of members of the uniformed services and their families.