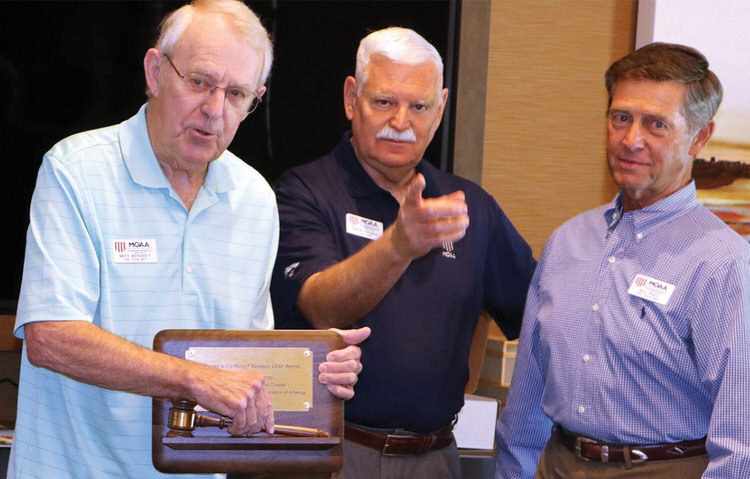 At its May 21 meeting, the Catalina Mountains Satellite Chapter of the Military Officers Association of America (MOAA) recognized the organization’s first president, COL Rett Benedict, U.S. Air Force, Retired. COL Benedict served as president from 2015 through 2018.

COL Benedict attended Union College in Schenectady, N.Y., majoring in physics. He also participated in the Air Force Reserve Officers’ Training Corps. Following commissioning in 1964, COL Benedict traveled to Southern California to begin his assignment with the Ballistics Systems Division. There he was tasked with supporting the acquisition and development of Intercontinental Continental Ballistic Missile (ICBM) systems such as the Minutemen II and III.

Subsequently, COL Benedict attended the Air Force Institute of Technology at Wright-Patterson Air Force Base near Dayton, Ohio. There COL Benedict earned both his Masters of Science Degree (1970) and Doctors Degree in physics (1977). Between these educational assignments, COL Benedict was detailed to the Air Force Weapons Laboratory at Kirtland Air Force Base in Albuquerque, N.M., to participate in a variety of nuclear survivability activities and high-power laser development.

This educational and military research background led to an assignment starting in 1979 to the Defense Advance Research Agency in Arlington, Va., for five years. COL Benedict worked with scientists and engineers at multiple Air Force, Army, and Navy locations developing system concepts and technologies for a variety of military applications, including laser communications with submerged submarines, anti-satellite capabilities, and ballistic missile defense.

COL Benedict joined Schafer Corporation, located in Colorado Springs, shortly after retiring in 1988. Schafer was a small company specializing in planning and development of technologies and capabilities for a variety of defense, energy, and space applications. COL Benedict was the general manager of the Albuquerque Operation, director of the Space and Directed Energy Division and the chairman of the board of what had become a 500-person company from 1991 through 2008. After the company was sold in 2008, he continued to be a consultant to the company through 2016 on a variety of government contracts.

COL Benedict and his wife Michele moved to SaddleBrooke in October, 2014. COL Benedict has been very active with SaddleBrooke TWO, serving on its finance committee for three years and then becoming the treasurer for three additional years.

The leadership of the former Catalina Mountains Satellite Chapter recently announced that the organization had become Arizona’s newest chapter of MOAA. The next meeting will be on Saturday, Oct. 15, at the SaddleBrooke Ranch Grill, beginning at 11:30 a.m. The guest speaker will be Fire Chief Randy Karrer of the Golder Ranch Fire District. Chief Karrer will provide an overview of the services that the Golder Ranch Fire District provides to the community.

If you are interested in joining our organization, please contact Membership Chair LTJG David Bull by email at [email protected] or by telephone at 520-825-0604.