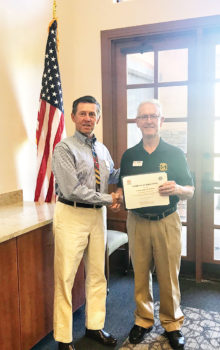 Our April guest speaker was Army Colonel (Retired) Joseph O’Connor, who talked about how his military career was directly affected by his attendance at Officer Candidate School (OCS). Colonel O’Connor was drafted in 1966 and attended Basic Training at Fort Benning, GA. He was given the opportunity to apply for OCS, was accepted and graduated in January 1967. He spoke about the urgency for Officers for WWII, Korea and Vietnam. So, the Officer Candidate School was instituted to fill the shortage. The term “90 Day Wonder” was created to describe a way to balance the shortage of Officers in WWII. OCS was formed in July 1941 and graduated the first class of OCS students. Of the 800,000 officers who served in WWII, half were OCS graduates. By 1952 nearly 17,000 had graduated from OCS. After 1954 all OCS classes were closed following the Korean War. Then, Vietnam happened and in 1965 OCS was re-opened to support the Vietnam War. In 1973 branch immaterial OCS was established as the only OCS program at Fort Benning, GA. In 1976 the Women Army Corps School merged with OCS and the integrated OCS has remained active. The motto for OCS in 1941 was “Standards, no compromise.” It is the motto that remains for OCS today. Colonel O’Connor said OCS is and was one of the most demanding army schools he attended, as it was both physically and mentally challenging. He said OCS is divided into three phases. The first phase is basic army training. The second phase is focused on building leadership skills and the third phase is assuming leadership roles. He said he learned that you can’t simulate combat in a classroom. The true test of the skills learned in OCS was actually on the battlefield. Colonel O’Connor had high praise for the Non-Commissioned Officers (NCOs), who were instrumental in teaching and guiding the young and inexperienced officers on the battlefield. Colonel O’Connor was inducted into the OCS Hall of Fame at Fort Benning, GA in 1992. He said the criteria for induction is either a Medal of Honor recipient, attaining the rank of Colonel or high achievements as a civilian. To conclude his talk, he read a very moving poem titled A Company of Men. His talk was very interesting and informative.

Subsequent meetings will be held the third Saturday of each month, October through April, at Catalina Room of the Mesquite Grill in MountainView Country Club complex starting at 11:30 a.m. with lunch followed by a short business meeting and a speaker. Spouses are welcome and invited.

The Catalina Mountains satellite is part of Tucson Chapter and encompasses Northwest Tucson to include Catalina, Oracle, parts of Oro Valley and Marana, SaddleBrooke and Sun City.