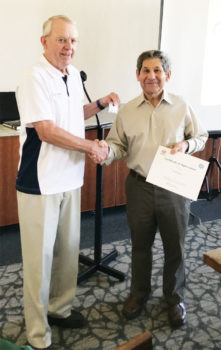 Willy Halpert shared his experiences in the ‘Six Day War’ (June 5-10, 1967) and more with our Catalina Mountains MOAA Group. Willy was French born in 1933, a holocaust survivor and a member of a special Israeli Navy unit that was equivalent to the US Navy SEALS. He and his wife moved to SaddleBrooke almost ten years ago, a real international citizen.

World War II left Willy and his three sisters as orphans in Belgium. Fortunately, an uncle was located in Australia, so Willy and his sisters emigrated there. An early swimmer, Willy happened upon Australian Navy divers in a flooded quarry and they provided him with his first scuba training. That convinced him that he had found his calling. In the late 1950s, Willy emigrated to Israel and opened a small diving school that became very successful along the Red Sea near Eilat, Israel and the Sinai Peninsula. Resourcefulness was essential in these early days of Scuba diving. For instance, because of the cold water in the Red Sea, they had to develop a form of wetsuit, long before they were in common use.

Like almost all Israelis in that time period, Willy joined the military, specifically as a special Navy diver. Training was extreme, as is the case for our special forces. Night operations, training with enemy weapons and eventually fighting in the ‘Six Day War’ were all part of the job. In the ‘Six Day War’, air operations dominated the first day. Israel conducted dozens of simultaneous missions in the Sinai theater, timed to seconds for the initial strikes, in the days before GPS, quite a feat. As we all know, these strikes mostly eliminated the Egyptian air capability on the first day, giving Israel air dominance. Israel learned that some of the pilots on the other side were Russians, not Egyptians.

Willy’s outfit was given an assignment to decommission an Egyptian radar site in the Gulf of Suez. They departed Eilat in a small, uniquely fabricated and engined boat and captured an Egyptian ship en route. They drove on to the radar site, destroyed it and got out before the Egyptians could begin their defensive bombardment. Highly successful mission and a tribute to talent and dedication of the Israeli special forces personnel.

The next Catalina Mountains Chapter of MOAA meeting will be held on Saturday, April 21, 2018 at 11:30 a.m. in the Catalina Room of the Mesquite Grill. The speaker will be Dr. Sandy McNabb who lived in Egypt for many years. Her topic will be: “Syria: Why is the civil war so difficult to resolve?” That will be the last meeting of our spring season.