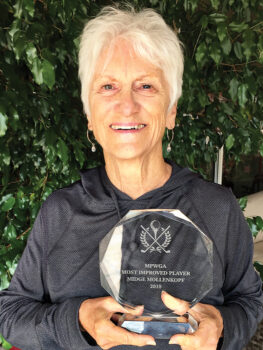 Midge (Miller) Mollenkopf was awarded the MountainView/Preserve Women’s Golf Association (MPWGA) 2019 Most Improved Player (MIP). Her handicap decreased from 26.8 to 25, an improvement factor of 1.049. Throughout 2019, Midge routinely practiced all parts of her game and worked to increase her overall strength. She played over 70 rounds, with 32 on league play days, far exceeding the required 48 rounds, including 12 with the league. The MIP Award was established 18 years ago by previous MPWGA member Mary Sturgeon Canfield in honor of her daughter Nancy, who took up golf at 55. Within three months, Nancy was breaking 100, and soon thereafter began breaking 90. The Mary Canfield Trophy was first presented to a MPWGA member in 2002, in memory of Nancy, with Mary’s hope that it brings the recipient pride in her accomplishments and a challenge for further improvement. Mary and Nancy are no longer with us, but their memories, and Mary’s dream, are honored and live on through the MPWGA’s annual award.

On Jan. 14th at the 2020 Kick Off Dinner, outgoing Handicap Chair Betty Cole spoke about the Mary Canfield MIP Award and made the winner announcement. Midge was unable to attend the dinner due to a hospital stay, but learned of her award from her good friend Gail Campbell later that evening. In her post-surgery drug haze, Midge repeatedly questioned whether she was hallucinating or hearing things and, when convinced otherwise, claimed she was in total shock. No worries, though, as she was safe at the hospital in the event resuscitation was needed. When she told her son about her win, he said that the only golf award he would ever win would be the “Most Likely to be Beat by His Mother” award. Midge’s name has been engraved on the Mary Canfield trophy displayed in the glass case outside the Mesquite Grill, and she has received a personalized crystal trophy and MIP bag tag.

Midge took up golf seriously when she moved to SaddleBrooke 14 years ago, still sporting a 1-iron in her bag. Midge uses O.P. (other people’s) balls, usually synonymous with naughty O.B. (out-of-bounds) balls. Her motley group of 12 plays on Thursdays where the first 18 holes are just a warm-up for the 19th hole and a margarita. She enjoys all parts of the game, but calls chipping an “enigma” and putting a “challenge.” She occasionally has a blow-up hole, but balances it out with a hole-in-one from time to time at The Preserve, where she shot her best round ever: an 84.

Midge calls the MPWGA “a great group,” and more than just the competition, loves the camaraderie and gimmicks of the Tuesday league games. She has been active in the league since moving here and has chaired events such as the “Margaritaville” Member-Guest tournament. Midge is a focused golfer and says that for her golf is quite mental. Others just say she has a “crazy good time” on the course.

Life in SaddleBrooke has been good to Midge. She met her husband Al Mollenkoph soon after moving to Arizona and married him a year later. In addition to golf, Midge stays more than active with tennis and pickleball, is an avid bridge player, and was recently awarded artist of the month. Midge will be back to golf later in February. As for getting back to margaritas, well, no doubt that is already in the past tense. Now that both hips have been successfully replaced and she golfs good enough for the Refurbished Legends Tour, all Midge really has to worry about is blowing out a flip flop, stepping on a pop top, and searching for her lost shaker of salt.