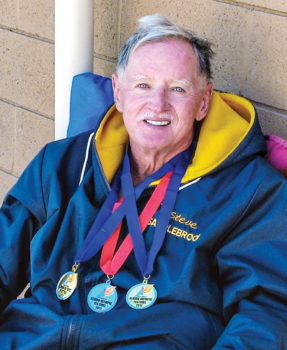 A year ago, the SaddleBrooke Swim Club and other community friends were shocked to learn of the passing of Stephen Proffitt. Stephen was an M.D. who gravitated to the warm climate of the Arizona desert with his wife Rebecca upon retirement. He became an integral part of the community and was extremely active in the swim club where he served as president and competed in master’s competitions earning many medals and making lifelong friends. He and Rebecca were benefactors of the swim club. Even after having a stroke, Stephen continued to train and compete, arriving at the pool with his walker (nicknamed “Lloyd”). He needed assistance to get up on the starting blocks, but once he dove in, he still could swim quite well and continued to compete. He inspired everyone with his dedication, persistence, quick wit, sense of humor, and positive attitude. When his health declined after a series of strokes, he and Rebecca moved back to California to be closer to family. He passed away on April 10, 2019, surrounded by family. Stephen is survived by his wife Rebecca, his daughter Rachel (Chris) and her children (Greyson and Ella), and daughter Sarah (John) and her children (John and Jacob), and his son David (Jill) and his children (Michael and Jennifer). Stephen is missed by many and remains in our hearts.