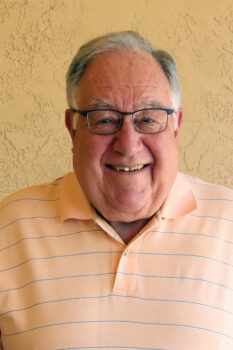 The Institute for Learning in Retirement (ILR) is proud to introduce board member Ted Sivalon, who serves as the registrar. Ted was born and raised in Butte, Mont. In high school, he was good in math and had an excellent physics teacher who spurred his interest in physics. After high school, he moved to Spokane, Wash. where he attended Gonzaga University and earned a BS in physics in 1961. He then moved on to Moscow, Idaho, where he was a teaching assistant and earned an MS in physics at the University of Idaho in 1963. His master thesis was on the orientation of homogenous auroral arcs. While working at Caltech’s Jet Propulsion Laboratory (JPL), Ted earned an MBA in 1979 from Pepperdine University in Malibu, Calif.

He spent his entire career of 34 years in the aerospace industry. In 1963, he worked for Rocketdyne, a division of North American Aviation. He conducted spectrographic studies of rocket exhaust plumes for a ballistic missile defense system and tested ablative materials for use in the Gemini and Apollo programs. In 1966, he was employed at Caltech’s Jet Propulsion Laboratory. NASA’s JPL is the leading center for robotic exploration of the solar system. While at JPL Ted served various roles, including contract technical manager, and he had liaison responsibilities with engineering and scientific personnel. He later served as the business manager for the guidance and control division, which involved allocation and control of millions of dollars of government funds. For his superior service he was awarded the NASA Exceptional Service Medal in 1993.

Ted met his wife, Betty, while at Rocketdyne, and they were married in 1967. They have three children who live in Idaho, California, and Nevada and six grandchildren, who they visit often. They moved to SaddleBrooke in 2000. Ted is an avid golfer and enjoys watching college basketball, especially the Gonzaga Bulldogs. Betty loves SaddleBrooke and has helped with the SaddleBrooke One library and also enjoys sewing, knitting, and quilting. Ted has been on the ILR Board of Directors for six years and serves as the registrar. We are pleased to have Ted participating with the ILR.