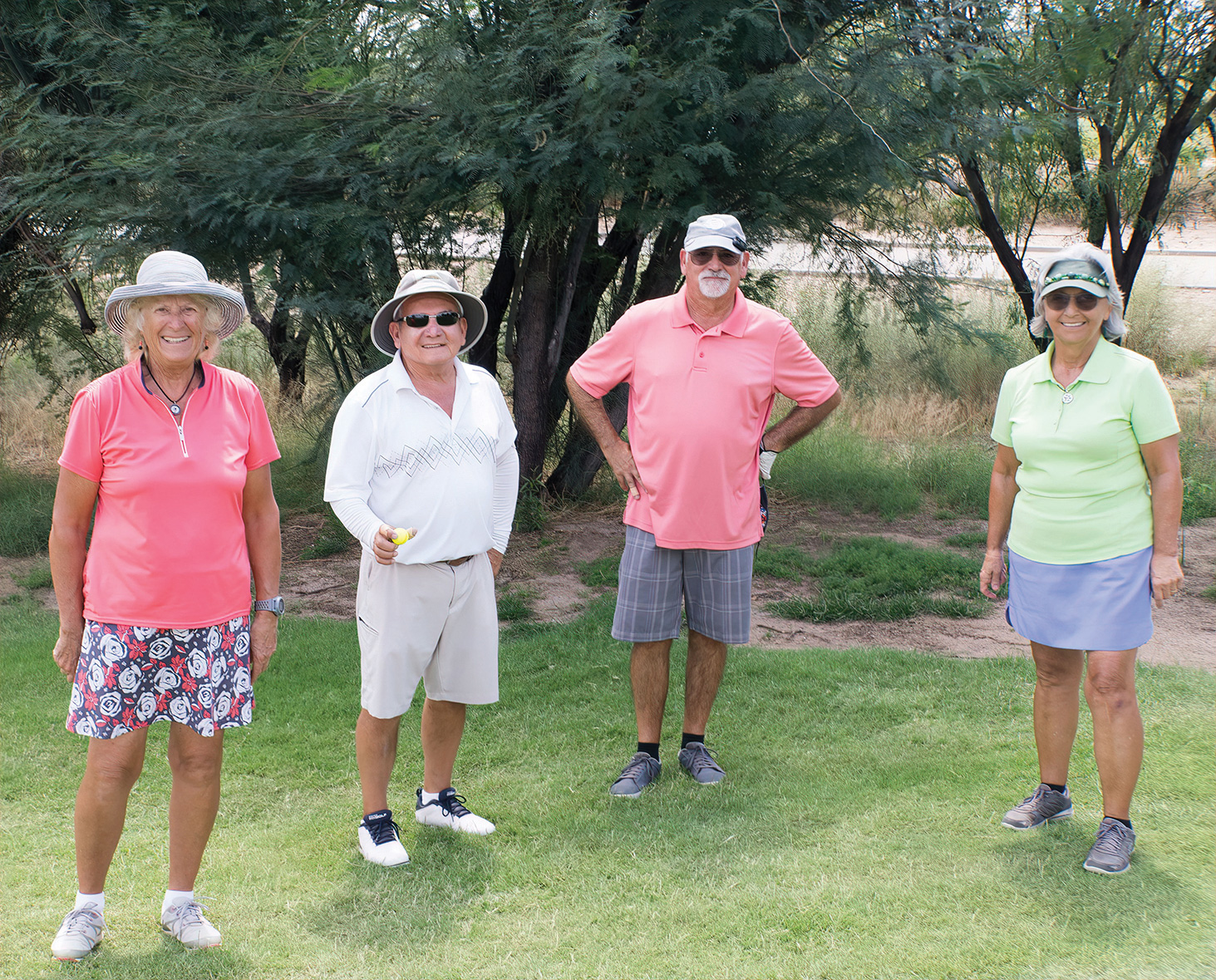 Sept. 1 and 3 marked the seventh odyssey around MountainView Golf Club for the Martians and Venusians from the MountainView/Preserve Men and Women’s Golf Associations (MPMGA and MPWGA). It was the third year of the new format, changing the blazing bolide battle between the Gods of War and the Goddesses of Love to teams of two men and two women, all speaking the universal languages of love, fun, and golf. The best kept secret of the universe has been revealed. Martians and Venusians really, really like each other, are truly a match made in heaven, and like to putter around together in the same solar system. So, with sunny dispositions and friendly smiles, 16 mixed teams began spreading ooey, gooey love all over the golf course.

The men and women’s golf leagues alternate hosting the annual Mars-Venus tournament, organized by a member from each. This year, the little green men from the MPMGA hosted the friendly fairway fray, with the purpose of “sharing the challenge of playing together against a field of mates and to have fun during this COVID-19 Madness!” Why, you’d have to be from a different planet not to have had fun at this convivial encounter of the third rock coordinated by Matt Kambic and Janey Clausen. Mars and Venus are no longer polarized planets a world apart. Their inhabitants have met in the middle, and that’s one giant leap for humankind.

The congenial competition on day one was two best balls from rotating partners. The chummy challenge on day two was the Cha-Cha-Cha, in which various combinations of best net balls were scored for each hole. The first-place winners were the Superstar Fireballs with a score of 267 (26 below par), and Janey Clausen, Manny Lemos, Rennie Temple, and Connie Plapinger won $50 each. The Shooting Stars were in second place and a two-way tie with scores of 276 and the second-place winners won $38 each. The first team included Dennis Marchand, Len Kirklin, Debbie McMullin, and Debbie Ogle; and the second team included Bob Ogle, Larry Fox, Ellen Victor, and Connie Sherman. It has been suggested that in order to prevent any star wars during next year’s orbit, there should be a little clean up on Rock Three. A most perplexing phenomenon of the universe is that every time Rennie from Rock Four and Janey from Rock Two play together, their binding energy creates a nuclear fusion of astronomical proportions. Some not born under such lucky stars think they should be brought back down to earth and required to unfriend each other.

We are starstruck by Dorothy and Lauren Moore of The Moore Advantage Real Estate Team, our tournament sponsor, for their loyal support and generous prize pool donation. Thanks to Matt Hudson, director of golf operations, and Mike Karpe, assistant golf pro, for their help with an out-of-this-world event right in our own little piece of the universe. We look forward to next year’s rotation around the course, and the sighting of another UFO, known in the SaddleBrooke Planetarium as an “Unbelievably Fun Outing.”