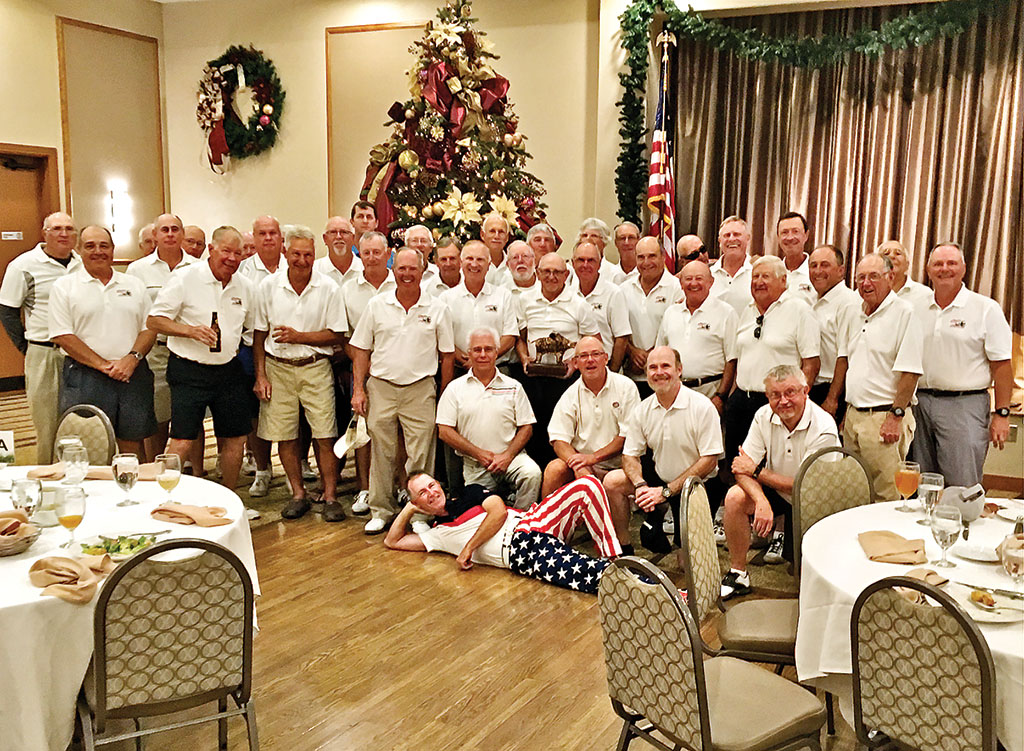 The M-PMGA and the SMGA battle every year for ownership of the Javelina Cup. It is two days of team competition with each association hosting a day at their own home courses. The format of play and scoring was the same for both days as each club hosted two nine hole matches, a team Net Best Ball and a team Shamble. In each match one point was awarded to the outright winner of a hole and one half point was awarded to both teams if the hole was halved and an additional bonus point was given to the team that won the match. Each match carried a point value of 10. This year seventy-six players, thirty-eight two man teams, braved the early morning cold and sometimes cloudy skies to battle for the cup. Many thanks need to be given once again to Bob Eder and Gus Pachis, Special Event chairmen for HOA 2 and HOA 1, for organizing this fun filled event.

The SaddleBrooke Golf Club hosted day one on December 7 and I can assure you it was extremely cold for the 8:00 a.m. shotgun. As you might suspect the home team prevailed, winning the day by the score of 204 to 176. For the SMGA the teams of Clarance Johnson and Bob Soerens, Rob Malik and Larry Crum and Dave Rutkowski and Rudy Rutkowski were the top point scorers with 13.5. For the M-PMGA the team of Tom Pryde and Darryl Henderson were the top point producers also with 13.5. Congratulations to all of you playing some great golf.

Day two was hosted by the MountainView Golf Club on December 10 and, as expected, they provided much warmer and more pleasurable weather as well as that tried and true formula known as home field advantage. For the day the M-PMGA outscored the SMGA by the score of 217.5 to 162.5 and that margin of victory was more than enough to allow the HOA 2 team to win the Javelina Cup for the third straight year. The final score was 393.5 to 366.5. On day two the M-PMGA teams of Ron Moreland and Ed Skaff and George Dawydowych and Al Tracy scored a total of 14.5 and 14 points respectively. Fabulous play gentlemen, but your supporting staff needs to receive praise also as eight other two man teams won at least 12.5 points on the day making it truly a team victory! Dave Rutkowski and Rudy Rutkowski won 13 points for the SMGA on day two and also won the most points, 26.5, of any team in the event besting the M-PMGA team of Bill Webster and Leo Croteau and Phil Gray by one point. Congratulations to all of you again.

Everyone gathered at the MountainView Ballroom for lunch and refreshments after play and of course, for lots of chatter and boasting. Thanks again to all HOA 2 Banquet Staff members and to all professional golf staff members of both clubs who worked to make our tournament perfect. We truly appreciate your support.