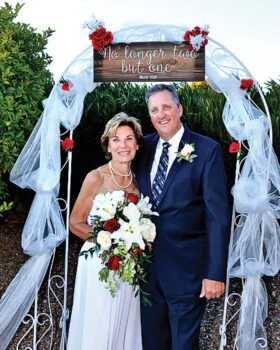 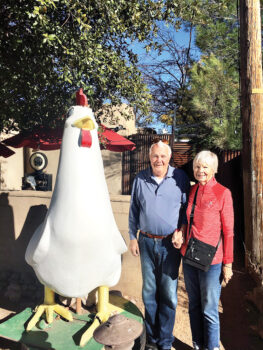 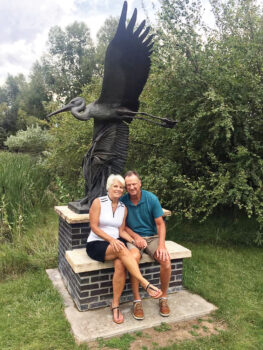 Many people have been faced with life changes in losing a partner. However, there is something called “the second time around” belief, which suggests that life can and will go on. In celebration of Valentine’s Day month, here are some stories about three couples from SaddleBrooke who found love and happiness again after changes in their respective lives.

Trudy (Rossi) and Mark Miller were just married on Saturday, Jan. 4th. Congratulations to the new Mr. and Mrs. Miller!

Trudy moved to SaddleBrooke, with her husband Rocco, in 2010. She had retired, after 37 years, from the United States Steel Corporation, in Pittsburgh, PA. Mark, who has a career in the jewelry business, moved here with his wife, Pat, in 2017. Trudy and Mark met at the dog park and soon both couples became friends. Unfortunately, Rocco passed away unexpectedly in January 2019 due to cardiac disease. Mark’s wife, Pat, passed away in June 2019 after an extended illness. Both Trudy and Mark say that they are “blessed” every day with their new-found relationship.

Sandy and Dean Ness have been married for 2.5 years. They lost their respective spouses after they protracted illnesses. Sandy was a first cousin to Dean’s wife. Sandy, a retired home economics teacher and special education assistant, was born in Wisconsin. Dean, who retired from IBM, was born in Minnesota. Dean was married for fifty-nine years and Sandy eighteen years.

A few months after the passing of Dean’s wife, Dean called Sandy just to talk. Sandy told Dean that “things would get better over time.” After they hung up Sandy’s phone rang again; it was Dean and he asked, “Would you like to go out with me?” To which Sandy said “Of course!”

They both say, “God put us together and we couldn’t be happier! We both feel that it is the best thing that ever happened to us!”

April and Jim Broughton thank technology for finding each other four years ago. Even though they both lived in Portland, Oregon, Jim lived on the east side of the city and April lived on the west side of the city. They would never have met without each looking into a dating website. After meeting for a 7 a.m. round of golf, they have been together for four years. They were married two years ago.

Jim is a retired realtor estate broker and April has had several careers, starting with a globe-trotting business position, followed by another career after getting her second master’s degree in mental health counseling. She is currently working three days a week in private practice as a licensed associate counselor.

Like a friendly home the second time you call.

Who can say what brought us to this miracle we’ve found?

There are those who’ll bet love comes but once and yet,

I’m oh, so glad we met the second time around.”

“The Second Time Around” – recorded by Frank Sinatra, 1960

Companionship is precious the second time around. This I have learned.