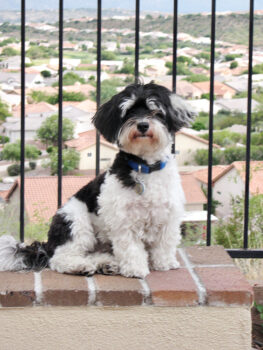 Imagine the joy of being with a canine buddy while enjoying our fabulous Arizona sunsets, the pleasure of a dog snuggling into your lap, and the power of a canine’s gaze.

With dog ownership and dog walking linked to better physical and mental health, let’s make SaddleBrooke more dog friendly and SaddleBrooke residents without dogs happier to have them around.

Recently two new SaddleBrooke TWO residents separately hesitated while answering my casual question, “How do you like SaddleBrooke?” One immediately expressed irritation and the other sizable disappointment about being unable to walk their dogs on SaddleBrooke TWO’s golf course paths. “You can’t even drive the paths after hours with them in your golf cart!”

Though neither new neighbor was a golfer (only about one-third of SaddleBrooke residents are), they were attracted to the beauty the courses provide. They moved to be near family and enjoy nature, knowing that their dues were needed to maintain the fairways. “But I never realized I would have to put my two rescued greyhounds into my car and drive three miles to walk on SaddleBrooke One’s courses,” one said. “I wish I’d done more research before moving here.”

SaddleBrooke TWO board member Bob Kolenda explained access was denied for these reasons, “One, not all pet owners would be conscientious in picking up after their pets. I see dog feces on the streets all too frequently. Two, the pet droppings would be picked up by some of the golf equipment and basically hurled at the employee riding the equipment. Third, many nasty chemicals including herbicides, insecticides, plant hormones, etc. are sprayed and could potentially harm the pets.” None of these reasons, however, preclude pets from at least being allowed to ride in carts.

Three out of five Americans and 68% of current U.S. households own dogs. A decade ago, about one-third of adults in the 70-and-over age group owned pets. In 2015 and 2016, when the leading edge of the Boomer generation began to turn 70, this percentage jumped to around 40%, and the overall rate of pet ownership is expected to rise.

Scientists document that petting a dog lowers heart rate and blood pressure, relieves stress, and releases the bonding hormone oxytocin. Working as a pet therapy team, my own furry Havanese, Spark, and I have witnessed firsthand the therapeutic benefits canines bring to hospitals, rehab centers, and nursing homes. No wonder we were welcomed. If you ever attend a graduation ceremony for the assistance dog’s organizations Guide Dogs for the Blind and Canine Companions, you’ll never forget it. Dog ownership has been associated with a 24% reduction in “all-cause mortality.” Animals enrich our lives.

However, poop on paths and bags left on curbs harm the quality of SaddleBrooke life. Be a good neighbor and pick up. Can’t we prove that we are mature enough adults and good enough citizens to walk and ride on the paths that we own?