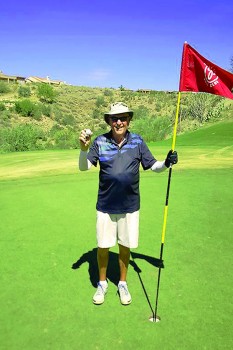 On Friday, September 18, Hank Malter recorded his first hole-in-one on the sixth hole of the Preserve Golf Club. Hank’s best guess was that he had a shot of about 115 yards and he chose his trusty nine iron. As he set up for the shot his only thoughts were to get on the green, to two putt for par and to pick up two points for his team. His regular Friday group was playing a game called Quota and his team needed badly his contribution. When he left the tee box he knew his swing was good and that he had made solid contact but, and this is a big but, he never saw the ball.

His playing partners, Keith Offord and I, were the first to arrive at the green and quickly located our balls on the back of the green. We had not seen Hank’s shot either. When Hank arrived and started walking toward the left side of the green, we followed. No ball was seen and Hank’s disappointment was becoming obvious. He repeated that it was well hit and that it should be near the green so I decided to walk back to the cup just to see if by chance it had gone into the hole. The rest is history. Congratulations again, Mr. Hank, for your first hole-in-one. By the way, did I mention that Mr. Hank is 80 years young!?

A SaddleBrooke resident for about 11 years, Hank started playing golf over 55 years ago while living in the Bay Area. His first rounds were played at Harding Park but most of the time the Indian Valley Golf Club in Novato was his home course. Always a gentleman, Hank shared a beverage or two with his good friends at the Bistro after the group finished play that Friday. Thanks again, partner.