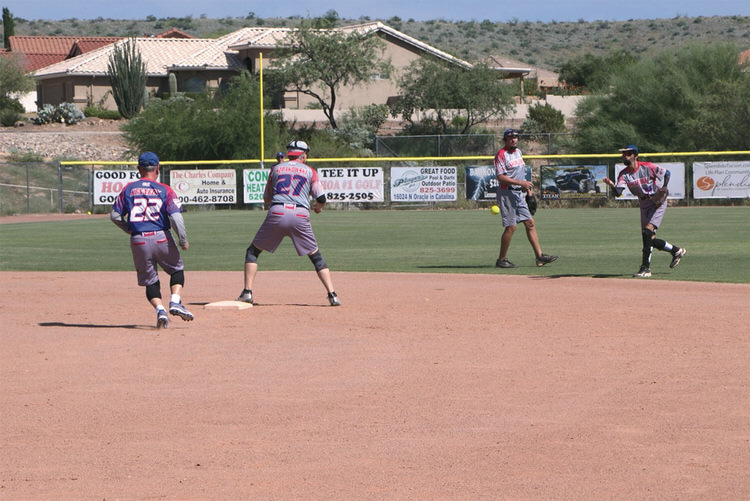 The Senior Softball Labor Day tournament was a big hit with the community.

Tony Soprano gave a lot of advice back in the day, some of it even wise, like this one to his kids: “If you’re lucky, you’ll remember the little moments like this, that were good.”

The SaddleBrooke Senior Softball annual Labor Day tournament might have been one of those moments the Jersey Street Boss had in mind.

The tournament is one of four holiday events the league conducts every year, but the first since last year’s St. Patrick’s Day tournament, due to COVID-19 restrictions.

On a beautiful sunny Saturday morning, on a gem of a ball field, the community came out in record numbers to watch their neighbors and friends play America’s national pastime, or at least the best version of it for people our age, softball.

The stands were filled along both the third and first base lines, and spectators lined the pavilion behind the seats. Residents who hadn’t seen each other in a while hugged and made plans to get together; long-timers introduced new neighbors to their friends; children and grandchildren cheered on their parents and grandparents on the field; people brought their dogs. Everyone waved and smiled at each other. The community was in a celebratory mood.

The ballpark was ready for the occasion with red, white, and blue bunting everywhere, a manicured infield, a jocular public address announcer (King Mitchell), an eclectic mix of music (Leroy Johnson) playing between innings, the smell of hot dogs and brats in the air, the packed crowd standing and singing the national anthem together. All that was missing perhaps was cold beer (against league rules).

On the field, the fans enjoyed some entertaining softball. They cheered the good plays and were respectful of the not-so-good ones. They seem impressed by the quality of play. One said, “You can tell most of them played ball as kids.”

The scores of the three games played by members representing all five leagues were 10-3, 10-9, and 12-10. There was some impressive fielding in each game and solid hitting. Of note, three octogenarians played in the first game, including honorary managers Jack Graef, 88, and Jake Jacobson, 86. The second and third games also included four men in their 80s.

“It was a special day for all of us,” Jessica Passoni, tournament director, said. “It was wonderful to see the community come together and celebrate, especially in light of the past 18 months. It was a great way to end the summer.”

Passoni noted that while the food was free, donations from spectators were accepted and reached an all-time high.

The league’s next tournament is Veterans Day, scheduled for Nov. 13.

SaddleBrooke Senior Softball is in its 17th season, with more than a hundred men and women competing Monday through Friday year-round in five different leagues based on ability. The fall season kicks off in October.