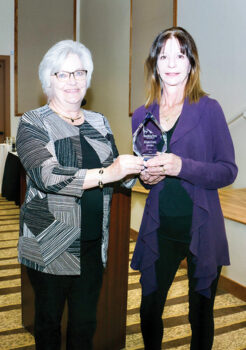 Kim Cox earned the MountainView-Preserve Women’s Golf Association (MPWGA) 2021 Most Improved Player (MIP) award. The annual award, started 19 years ago by member Mary Canfield, carries on the tradition of inspiring pride in accomplishment and challenge for continued improvement. Kim said she was floored when her name was announced but was able to stand back up to receive the personalized crystal trophy and bag tag presented by President Judy Grow. Her name will be engraved to join the previous 18 winners on the trophy displayed near the Mesquite Grill.

Kim started 2021 with an index of 19.3 and ended with 17.7, a differential factor of 1.05. She attributes the improvement to having learned the SaddleBrooke courses and will work toward the goal of a single-digit index.

Kim and her husband, Jim, came to SaddleBrooke in 2020 from La Quinta, where they were members of PGA West. Kim immediately joined the MPWGA, served as secretary in 2021, and will co-chair the Special Events Committee this year. She found the MPWGA to be a wonderful league, and the members were welcoming. Since her arrival, she has delighted and dazzled others with the creativity of her whimsical seasonal golf outfits, spreading funfetti and frivolity as she goes. She dresses to the tee and often takes first place in costume fanfare. Likewise, Kim and Jim delight their neighbors by festively decorating their yard for all holidays. Kim has earned recognition as a certified funster in her neighborhood and the MPWGA.

Kim comes from a family of great athletes and golfers and has been golfing about 20 years, taught by her father. She golfs regularly with the MPWGA Tuesday league and usually gets in three rounds a week. She is known for her calm, cool, and collected demeanor and hits the ball long and low into the middle of next week. Kim’s best score on a SaddleBrooke course was 80, a score any golfer would envy. She appreciates the competition of the player against the course and likes the challenge within oneself to improve.

Kim is also known for her love of animals. In the world of golf, birdies, eagles, and albatross are considered part of the animal kingdom and are often friendly with Kim on the course. At home, she has been busy training her new, four-legged family member Sasha, a parti standard poodle, who came to her all lovable and almost perfect. Four months into training, it appears that Sasha will also win an MIP (Most Improved Pet) award. This training may include the retrieval of the golf balls that land in the backyard of the Cox’s newly built home overlooking the first fairway on the Preserve. Thirty-five years ago, Jim also came to Kim all lovable and almost perfect. He has finally completed his training, has won an MIP (Most Improved Partner) award, and has been deemed a keeper.

Congratulations, Kim! New pet, new house, new golf award—it would be pretty hard to improve on any of that!