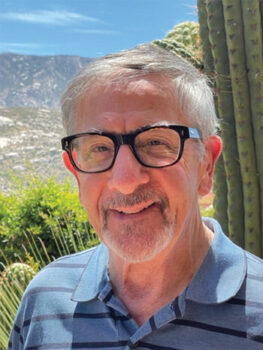 Lighting It Up for Community Circle Players: Meet Alex Infald

Alex Infald has been a fixture at the theater in SaddleBrooke for the past 17 years. He and his wife Donna moved here from the Bay Area of California in 2005, where he worked as an independent marketing consultant.

No stranger to theater, Alex started working backstage in professional theaters in New Jersey and New York beginning at age 16. Building sets, moving scenery, and doing sound effects and lighting helped him earn his way through both college and graduate school. He eventually worked as a stage manager for several Broadway shows and worked with the likes of James Whitmore, Sid Caesar, Bette Midler, Betty White, and Barry Manilow, to name a few.

In those days, working on stage lighting was a very physical and often dangerous job. Lights at the top of the theater had to be physically moved, and this often entailed sitting on a swing and being raised to the top of the theater with rope pulleys. Once lights were in position, intensity and color were subsequently controlled by hand levers and foot pedals. Theater lighting has certainly come a long way. Today, the lighting is controlled by a computer software program.

Currently, in the ballroom at SaddleBrooke TWO, there are approximately 75 lights, and each light is numbered. Each of the 75 lights is programmed by seven or eight adjustments that control color, focus, brightness, fade in, fade out, etc. Alex states that he can now do with one finger what once took three people to do.

Drawing on his decades of theater experience, Alex attends rehearsals to develop the lighting he feels best enhances the action and dialogue on the stage. He then tweaks the settings after consulting with the director of the production.

He explains that his job is to subtly enhance the dialogue and action on the stage without those nuanced adjustments being noticed by the audience. Alex explains, “If the audience is noticing the lighting instead of the action on stage, that means I screwed up.” He adds, “Theater is a magical place, and our job is to take the audience with us to this magical place, where reality is suspended and they become part of the reality we have collectively created.”

When not doing lighting for Community Circle Players, Alex is the lighting director for the shows at the DesertView Theater.