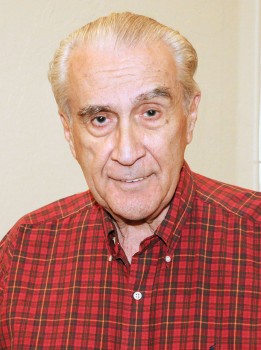 The ILR is pleased to have Punch Howarth as a faculty member. His long history as a professional musician makes him well suited to teach musical courses in the ILR educational program. Punch was born in Beaver Falls, Pennsylvania. While attending Beaver Falls Junior High school he decided he wanted to play drums in the marching band. This desire became reality and ignited his lifelong interest in music. Punch then attended Geneva College in Beaver Falls and earned a B.S. degree in history and music. He did graduate studies in music at Duquesne University followed by additional graduate studies at the University of Pittsburgh where he earned a Master’s degree in Psychology and Anthropology. Later he taught psychology and anthropology classes at Beaver Community College.

In the Army (1952-1954) Punch was an instructor in the Music School on base at Fort Dix, New Jersey. His mission there was to train enlisted men, who were musicians, for Army bands around the world. His professional music career started as a timpanist in the Germantown Symphony and the Philadelphia Symphony Club Orchestras. This was followed by playing percussion instruments with the Youngstown Ohio Symphony Orchestra (seven years). For the last 21 years Punch has played the timpani for the Southern Arizona Symphony Orchestra (SASO).

Another side of Punch’s expertise, far from the sound of a drum, is his interest in astrophysics. In retirement he had worked at Kitt Peak Observatory for 15 years and has lectured on cosmology and telescopes. Since joining the ILR faculty, Punch has taught courses in Symphonies, Concertos, Haute Musical (light classics) and Beethoven. In addition to music, Punch has a serious interest in ancient history and has taught an ILR course on one of his favorite subjects, the Mayan Culture in Mesoamerica.

When Punch has spare time he reads scientific periodicals and spends time with his wife Jeannine enjoying continental food, foreign movies, traveling and spending time with their six children. They have traveled extensively in Europe, Asia, Africa and Latin America. The ILR is pleased to have such a culturally diverse person as part of our faculty. For more information on the ILR, go to www.sbilr.org.

Expand your horizons this year by learning something new! Registration is currently underway for an exciting array of classes offered by the Institute for Learning in Retirement (ILR). ILR is an organization created by and designed for SaddleBrooke residents.

The classes are popular and fill quickly.

Delve into the instrumental works including concertos of these two giants of the Romantic music era. One follows Beethoven almost lock-step and the other, following Beethoven’s 9th Symphony, goes into the wild blue yonder.

One of America’s 19th Century novels is Herman Melville’s epic, Moby Dick. This work is not just about a man after a whale; it is a highly symbolic novel about man’s quests, his destiny, his relationships and the role of nature.

Learn about the history of one of the ancient world’s great civilizations, from the Old Kingdom with its massive pyramids to the great pharaohs of the New Kingdom, like Thutmose III to Cleopatra. Also covered will be aspects of the ancient culture including medicine and burial practices.

The Grapes of Wrath by Mike Carren

Explore the Great Depression and the “dust bowl” through this famous and controversial novel by John Steinbeck. For emotional urgency, evocative power and sustained impact, The Grapes of Wrath has few peers in American fiction! Discussion will include its historical context and ongoing influence.

The Genius of Moliere by David Stegink

Through a reading of five plays of the great 17th Century playwright Moliere, and excerpts from several DVDs, come to an understanding and appreciation of the nature and genius of Moliere’s comic vision and dramatic achievement.

Love & Romance, A Musical Journey, Part I by Susan Kravitz

Through live performances and iconic readings and recordings, follow the cultural and psychological history of the love song. The lyrical poetry of ancient civilizations will form a basis of understanding of how themes of love and romance evolved into the most popular form of expressive music in modern times.

To participate, become a lifetime member in ILR for $25. Members can then enroll in courses which are an excellent value at just $15 each. Registration is easy. Just go to www.sbilr.org. There you will find course details and instructions for registering and paying online or by mail. If you have questions e-mail [email protected] or call 262-3499.