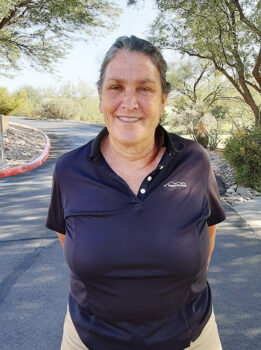 What is the role of a PGA professional? It is much more extensive than one would think. He/she manages all aspects of golf operations at a golf club, including being an instructor, a merchandiser, an organizer, a supervisor, and also carries out public relations and promotion of the club. But that’s not all. A PGA professional also works with the greenskeeping crew to ensure that a course is in tip-top shape.

The title of PGA Class “A” Golf Professional is the highest rank for a golf professional and SaddleBrooke One is fortunate to have two of them on board with us: Troy Jewkes and Jane Chanik, our newest PGA professional.

In a sit-down interview for this article, I found out more about Jane, and the person behind the title of Golf Professional.

One might say that Jane was meant to be a PGA professional. Her parents golfed, and Jane, the youngest of four children, became a junior golfer at the age of seven. She also played soccer and tennis. She grew up in Tucson and, after high school, attended college as a music major, then switched to communications. But the love of golf led her to work in the golfing business.

Jane worked at the Arthur Pack Golf Course (now The Crooked Tree Golf Course), where she mowed the fairways and greens. She eventually landed a position in the pro shop, and her passion for golf led her to apply to become a PGA professional. To achieve this, Jane, while working as a golf pro, attended three separate schools put on by the PGA: business school one, two, and three over a four-year period. Jane also earned the title of LPGA Class A Professional through the LPGA Teaching and Club Professional Division.

Jane’s PGA professional experiences include working at the Callaway Golf Center in Las Vegas, where she had the privilege of making a teaching video with noted golfer Billy Casper. She also worked at the Towa Golf Course (now Buffalo Thunder) in Santa Fe, N.M., in addition to selling real estate (land and ranches).

An opportunity to lease-purchase the Robert Trent Jones-designed Rio Rico Golf Club presented itself, and Jane and another PGA professional, Margaret Wolverton, with dozens of volunteers, worked tirelessly to restore and recondition the course to its original beauty. It was a futile labor of love, as it became clear that to achieve this goal, and to purchase the course would not have been a profitable venture. The property was eventually sold to a rancher.

Jane also worked at the Turquoise Valley Golf Course in Bisbee, but the tug of Tucson called her home, and Jane sent her resume out to various golf clubs in the Tucson area. In March 2019, she received a call from the H.R. Director at SaddleBrooke One; and, as they say, “The rest is history.”

Jane has exceptional people skills, which are demonstrated in every facet of her job. But helping people improve their golf game is her passion. And, quite frankly, it shows in everything she does.

Jane lives with her now partner, Margaret, in Oracle. They love animals, especially horses. Unfortunately, their horse, Angel, died in March, so, for the present, they are horse-free. Eventually, they will “regrow their pack.” However, Gertie, a Great Pyrenees, and Alice, the cat, keep Jane and Margaret company otherwise.