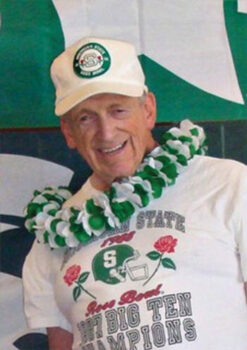 Mr. Aaron, of SaddleBrooke, Ariz., completed the final minutes of his life’s contest with his loving wife and three children by his side.

He was born Aug. 30, 1941, in Lansing, Mich., the son of George R. and Emily C. Aaron. He was raised in Okemos, Mich., and graduated from Okemos High School, Michigan State University, and did his graduate degree at the University of Illinois, Champaign-Urbana, doing further work later at Lake Superior State University.

He met his future wife Diane at Michigan State, and they were married in the Alumni Chapel on campus. Together they enjoyed going to college football, basketball, and hockey games. He was passionate about Michigan State sports, attending as many sporting events as possible, traveling many years to the Maui Invitational and the Final Four. A highlight for him was Michigan State’s win at the Rose Bowl.

While in graduate school, he taught high school science classes, and following the couple’s return to Michigan to raise their children, he also taught science in Troy, Mich.

After his brief career as a teacher, he was one of the first employees of the Michigan State Lottery, serving as district manager in Michigan’s Upper Peninsula (U.P.). He imbued his children with a love of nature and the outdoors, camping and visiting remote areas in the U.P. As a family, they enjoyed all the winter sports the U.P. offered, such as skiing, ice skating, and tobogganing.

Mr. Aaron retired in 1997, and he and his wife built a home in SaddleBrooke and added athletics at the University of Arizona to the sports teams he cheered on.

The former high school athlete and college hockey player played out his final game at University Medical Center in Tucson, Ariz., of complications following a massive heart attack and fall.

He was preceded in death by his parents and brother, G. Russell Aaron. Surviving are his wife of 57 years, Diane, and children Kristine Aaron-Jacobi (Thomas) of San Diego, Calif.; Holly L. Aaron (David Peterson) of Kensington, Calif.; and Erik T. Aaron of Mission Viejo, Calif.

His ashes will be scattered in the ocean at his former place on Kauai, Hawaii, in a private family service. Memorials in his name may be made to SaddleBrooke Community Outreach Kids’ Closet or to Senior Village of SaddleBrooke.

Michael (Mike) Williams passed away on May 24, 2022. He was born on Feb. 8, 1948, to Lorraine and James Williams in San Francisco, Calif. He grew up in the “City” and was a graduate of City College of San Francisco with a business degree. He went on to a career with Dun & Bradstreet and moved to Sacramento, Calif., which eventually took him to Arlington, Texas, where he met his wife of 40 years, Judy. Ultimately retiring in Saddlebrook, Ariz., he continued his love and passion for golf, sunshine, and walking his beloved dog Mindy each morning. Mike was one of the easiest people to be around. As one of his friends said, “He was always ready with a quip or joke and made every day special for everyone around him.” He always made people laugh.

Mike is loved by all his family and friends and will be deeply missed.