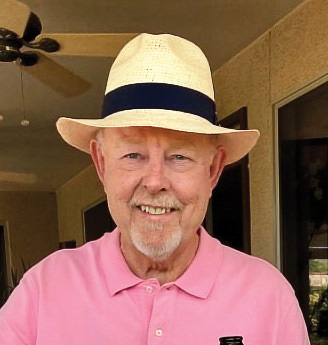 Jon grew up on a farm north of Mason City, Iowa. He graduated from Mason City Junior College and the University of Iowa where he studied business. Jon began his career with Sears Roebuck and Company in 1968 and worked for the company for 35 years. He loved Sears, his teammates, and all his positions. He ended his career as National Manager of Licensed Business in Chicago, Ill.

He retired to SaddleBrooke, north of Tucson, Ariz., with his wife Patricia Larsen Broers. Jon loved the mountains and the weather. Jon and Pat spent their retirement years traveling the world. Jon started a golf group, the FGA, which began with four guys and grew to over 20, and more wanted to play in this no-rules, fun group.

Jon was preceded in death by his parents Harlan and Helen Broers. He leaves behind brother Mike Broers of Mason City, Iowa; two daughters: Jennifer Rooney (Chris) and Erin Bernthisel (Chad); and five grandchildren, whom he adored. Jon lived a wonderful life filled with fun, adventure, and excitement. He enriched the lives of many people through his working days and with the lasting friendships he made along the way. He will be deeply missed.

A Celebration of Life was held in SaddleBrooke, Ariz. Donations can be made in his name to Senior Village of SaddleBrooke, P.O. Box 8584, Tucson, AZ 85738. 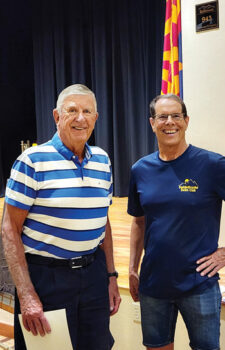 In Memory of Glen Peterson

On Saturday, March 19, at the RoadRunner Grill in SaddleBrooke, a Memorial Service was held for Glen Peterson. Glen passed away on Oct. 23, 2021, in SaddleBrooke where he had lived for 27 years. He loved it here and enjoyed golfing, hiking, spending time with friends, but especially swimming.

Glen’s son Bruce (Tulsa, Okla.) recalled how his parents had enrolled him in swimming at the age of seven, which then led him to swimming for the Palatine Park District in summer and Buehler YMCA in winter in Illinois. At an early age, Bruce was successful in swimming and competed in state and regional meets. His dad was so supportive and became a stroke judge/starter for the park district and YMCA for a number of years and also served as judge, starter, and director at the Illinois High School Association meets. Bruce said, “It was fun to be on the blocks with my dad as a starter!” In 1988 Glen began swimming himself in Illinois.

Swimming continued to be a passion of Glen’s life. He was instrumental in getting the SaddleBrooke Swim Club going and was its first president. The “Swim Club” was quite small at the time. Glen encouraged other swimmers to join the club. The only lap pool was at SaddleBrooke One with its four narrow lanes, so workouts were single file. What a thrill it was when the DesertView pool was built and we had a coach (Doug Springer) who volunteered to coach us. With a president, a new pool, and a coach, membership continued to grow, and many members competed and others joined for the camaraderie of swimming together and improving. Glen was a top swimmer and a two-time All-American.

Many people attended the celebration of Glen’s life that his devoted son Bruce had organized here. Bruce spoke of what a loving, caring, and special father Glen was to him and his brother Kent (Mesa, Ariz.). Bruce recalled fun memories with his dad of being around/in the water (pools, lakes, fishing). Friends related what a special, thoughtful, helpful, and fun person Glen was. Neighbors told of how he was part of the “Friday Club” who would regularly go out to dinner on Fridays. Doug Springer spoke of Glen’s dedication to the Swim Club, willingness to help the club, and of his swimming accomplishments. Swim Club members recalled Glen’s encouragement, enthusiasm, support, and participation in club activities and swim meets. He was well-liked and highly regarded.

Glen was preceded in death by his wife Jean in 2002 and his companion Claire Stalnaker in 2016. He was born in Chicago, Ill., spent his childhood in Minneapolis, Minn., and graduated from the University of Minnesota with a B.A. in business. For many years he worked for Xerox (Minneapolis, Rochester, New York, and Chicago areas). In Palatine, Ill., he actively volunteered in youth athletics and organizations. He spent the last years of his career in the computer and networking industry. He and Jean retired in SaddleBrooke in 1994. He made a huge difference here and is missed. Well done, Glen. Swim on!