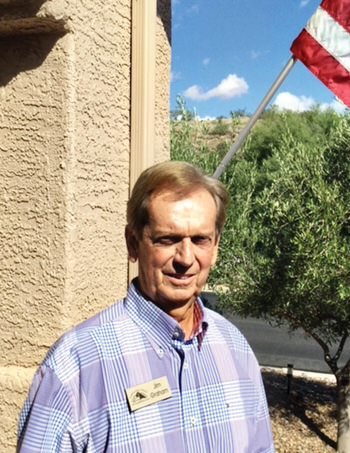 James Edward Graham, 79, of SaddleBrooke (Tucson), Ariz., passed away on Nov. 3, 2021, into God’s Grace, after receiving medical procedures and while visiting his daughter and her family in New Jersey. Jim, as he was affectionately known, was born on April 30, 1942, in Freeport, Ill., to Elvin and Ione Graham as the middle child with two sisters. Jim was raised in Warren, Ill., where he graduated from Warren High School in 1960. He then attended and graduated from Northern Illinois University in 1964 with a bachelor’s degree in business. Jim grew up with and married his high school sweetheart, Vicki Long, in a ceremony in Freeport, Ill., in 1965. They began their life together in St. Charles, Ill., outside of Chicago, before moving to Wisconsin for several years and then a few locations in Illinois before settling in Delavan, Ill. Jim spent six years in the Army National Guard. Jim was a machine tool salesman for 40 years. He was an avid sports fan of the University of Illinois football and basketball teams, a die-hard Chicago Cubs fan, and also a huge fan of the Chicago Bears and Chicago Bulls sports teams. He attended many Illini and Cubs games throughout his lifetime. He even got to see the Chicago Cubs win the World Series in 2016!

Jim and Vicki raised their daughter and son in Delavan before moving to Normal, Ill., when their children were finishing college. He retired in 2005 and moved from Normal, Ill., to SaddleBrooke, Ariz., to a large retirement community with a home they built overlooking two of his favorite things: a golf course and a large mountain range. Jim enjoyed golfing, looking at “his mountains,” and the wonderful weather in Arizona, as well as spending time with friends and family. Jim and Vicki attended and were members of the SaddleBrooke Community Church when he passed. They had many friends in the SaddleBrooke community with whom they often traveled around the world on various locations in Europe, the U.S., Canada, and Mexico.

Jim will be remembered for his devoted love for his family, kindness, and a wonderful sense of humor. Even during sickness and hospital stays, Jim was cracking jokes with his nurses, and everyone always fell in love with him. He enjoyed spending time with his children and his two granddaughters, Emma and Suzanna. Jim planned wonderful family vacations when his children were growing up and traveled throughout the U.S., parts of Canada, and even to Mexico. After retirement, Jim and Vicki continued to travel globally as often as they could. Even though Jim did not live near his daughter and her family in New Jersey, he traveled often to visit them, and they to him in Arizona. He always spoke to them by phone and FaceTime and wanted to be involved in their lives and know everything they were doing. Jim was proud of his children and grandchildren and all of their accomplishments. He was a hard worker, but was also dedicated to his family and always provided for them.

Surviving are his wife of 56 years, Vicki (Long) Graham, of SaddleBrooke, Ariz.; his daughter Angela Graham-Dherbey; son-in-law Jean-Pierre Dherbey; granddaughters Emma Grace Dherbey and Suzanna Lily Dherbey of Bordentown, N.J.; and his son Eric Graham of Reno, Nev. In addition, Jim is survived by his sister Ruth Armstrong and brother-in-law Jerry Armstrong of Florida and his sister-in-law Amanda Pas and brother-in-law Edward Pas of Monroe, Wisc., as well as two nieces and three nephews.

Preceded in death are Jim’s parents, Elvin and Ione Graham, and his younger sister, Betty Johnson. A Celebration of Life service in Arizona will be held after the holidays.

In honor of Jim, any memorial contributions may be made to SaddleBrooke Outreach, Suite L (Kids’ Closet), 63675 E. SaddleBrooke Blvd., Tucson, AZ 85739. 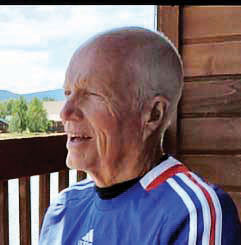 Eben “Buck” Wyles passed away on Oct. 21, 2021, at the age of 74. Buck had so many chapters to his story; sacrifices, triumphs, love, kindness, humor, an unwavering faith, and a soul that inspired everyone around him to be better versions of themselves.

Buck was born on Jan. 14, 1947, in Santa Fe, N.M., to Eben Wyles, Sr., and Marale Wyles. After the war, his father, a Major in the Army, was left to raise four children on his own. As a career military family, they moved frequently throughout the U.S. and Germany. Eventually, his father took a Commandant job at New Mexico Military Institute (NMMI) where Buck and his two younger brothers attended. NMMI has been a longstanding Wyles tradition, and Buck’s son Blair attended there his last two years of high school.

Buck graduated high school from NMMI in 1965 and junior college in 1967, giving him a direct commission into the United States Army, where he qualified to train with the United States Pentathlon Team in San Antonio, Texas. The goal was to send a team to compete in the 1968 Mexico Summer Olympics. When Buck didn’t make the four-person team, he was restationed in Fort Polk, La., for the duration of his two-year commitment.

During his time in San Antonio, he met his wife Sharon, and they married on Dec. 21, 1968. Upon his discharge as a 1st Lieutenant, Buck and Sharon moved to Denver, Colo., where they raised two children. Buck was hired onto the Denver Fire Department in April 1973. He retired after 32 years as an Assistant Chief and moved to SaddleBrooke in 2005. Buck was an excellent golfer, swam with the SaddleBrooke Swim Team, was an artist with oils and stained glass, and participated in Bible Studies and Links Fellowship.

Buck is survived by his wife Sharon, children Kristen and Blair (Valerie), seven grandchildren, and two great-grandchildren. Services will be at the VA Cemetery in Marina on March 16, 2022, at noon. In lieu of flowers, you may send donations to the Denver Firefighters Charitable Foundation at www.dffcf.com.