Elaine Lois Stamm, born Dec. 20, 1929, passed away peacefully in her sleep on Oct. 14, 2021. She is survived by her daughters Shelley Sheehan (Jim), Kim Carlson, Julianne Standish (Jeff), and six grandchildren. She was preceded in death by Don, her husband of 64 years, her son Don, and her grandson Evan Carlson.

Elaine was born in Eckman, N.D., and moved to Portland when she was five years old. She attended Jefferson High School and was a 1947 Rose Festival Princess. She attended Oregon State College, where she pledged Kappa Alpha Theta sorority and was the lead in the college production, Claudia. The next year, she transferred to Lewis and Clark College, where she met Don Stamm, and they married two years later in 1951.

In 1996 Elaine and Don moved to SaddleBrooke, Ariz., where they golfed, and Elaine became involved in activities and charities such as the Red Hatters, Assistance League, and Kid’s Closet. In 1997 she won the title of Ms. Senior Arizona. Elaine enjoyed playing scrabble and watching sunsets.

After Don’s death in 2015, Elaine met and later became engaged to Fred Klein. They often stated how lucky they were to have found each other.

Elaine wanted to be remembered as someone kind to everyone. We know she achieved that goal! We will miss her but are blessed by having had her in our lives.

A Celebration of Life will be held on Dec. 20 at All Seasons Oro Valley from 2 to 4 p.m. 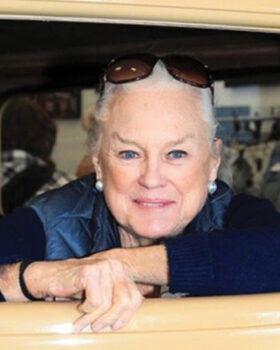 Sally V. Steele was born Aug. 1, 1937, in Kansas City, Mo. and was adopted at birth by Dwight and Gretchen Van Del. As a young girl, she enjoyed capturing an audience, whether it be as a ballerina or a magician’s assistant to her brother Curtis Van Del. She graduated from Notre Dame De Sion High School. By the age of 26, Sally had given birth to five children. She was an amazing and loving mother. Sally co-owned a Western art gallery in Tucson, Ariz. Being a woman who never settled, Sally expanded her family in 1977 when she married Raymond J. Steele and moved to Sedona, where she became a real estate broker. They had a passion for traveling and never sat still for long. In the summers, you could find them in Alaska. In the winters, they went to Mexico and Arizona, with many national and international pit stops in between.

Sally never met a stranger and was a best friend to many. She had a flare for entertaining and never passed up an opportunity to celebrate. One of her biggest joys was cooking and hosting. She did always say, “The way to a man’s heart is through his stomach.” Sally made beautiful jewelry and gave away more earrings than anyone you’ve ever known. She was always planning her next adventure, for there was no one who could slow her down. She loved to shop, go out to eat, and really loved the finer things in life. She was generous, charming, adventurous, and was truly one of a kind. Sally was known by many names and earned many titles, including sister, mother, stepmother, friend, amigo, confidant, aunt, Nana, and last but not least, Our Queen. Sally never lived in fear and always did what she wanted. Always.

Sally V. Steele passed peacefully on July 30, 2021, at the age of 83, surrounded by her five children in a room full of love. Sally’s legacy lives on through her children: Diane Gerrettie, Denise Stearley (Mike), Hal Munsell (Kathy), Mimi Dailey (Dave), and Kimberly Wilmer (Tom); her stepchildren: Sheri Downward (Mark), Robert Steele, and Jennifer Steele; her brothers Curtis Van Del, S.J., and Jay Shaw; and many grandchildren, great-grandchildren, nieces, and nephews. She is preceded in death by her husband Raymond J. Steele, her parents Dwight and Gretchen Van Del, her biological mother Avis Hinks, and her brother Mike Shaw.

An obituary will never do justice to a life so grand and remarkable as Sally’s. In true Sally fashion, raise your glasses to her favorite toast and a life well lived. “May you never lie, steal, cheat, or drink. But if you must lie, lie for a friend. If you must steal, steal a kiss. If you must cheat, cheat death. And if you must drink, drink with me.”