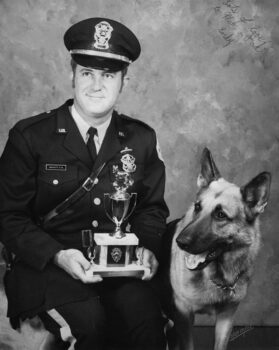 Gordon Bailey “Buzz” Hackett, Jr. passed peacefully of natural causes to be with the Lord in the comfort of his home, with his wife of 10 years, Mary-Lou, by his side on April 21, 2021.

Buzz was born in Newport, R.I., to Gordon Bailey Hackett, Sr. and Rose Dolores Hackett on Oct. 22, 1938. Upon graduation from B.M.C. Durfee High School in Fall River, Mass., Buzz proudly served a full tour in the United States Air Force. Upon completing his tour with honorable discharge, he built a distinguished career as a United States Park Police Officer spanning over 20 years. Buzz especially enjoyed his many years as a K-9 police officer with his loyal canine partner, Falcon, a German Shepherd.

Buzz was married to the lovely former Margaret Carole Bayes, the wonderful mother of all five children, prior to her tragic passing. Buzz was predeceased by his parents and his sister, Kathleen E. Campeau.

Upon retiring from the U.S. Park Police, Buzz served as the Director of Security for Columbia Hospital for Women, where all five of his children were born. Buzz also worked many rewarding years in security and safety leadership roles at Albert Einstein Medical Center, Philadelphia, Pa., and later at Merck. Throughout his entire career, he maintained an insatiable work ethic and found it difficult to fully retire. He continued to work into his late seventies on security patrol for his beloved community of SaddleBrooke.

Buzz lived 82 wonderful years with all but the past year incredibly active. Buzz never met a stranger, and he put forth real effort in maintaining healthy relationships with his family and friends. Throughout his life, he kept his unwavering Catholic faith. He remained active in local charities and gave back to his community, helping those less fortunate.

Buzz was an avid collector of law enforcement badges, patches, and other memorabilia. He enjoyed reading about significant historical events, biographies, and fiction suspense thrillers. He enjoyed traveling, but his favorite family adventure was vacationing in the Outer Banks, N.C., a family tradition every year over the past 20 years, where he was always the first one up making coffee for all. Buzz had a sweet tooth the size of Texas, and he spread his love of sweets to his family and friends.

He is remembered as a loving and generous husband, father, grandfather, uncle, brother, and close friend to many people over many seasons. His greatest pride and joy was his family.

Philippa “Pippa” McEwen passed away peacefully at her home in Venice, Fla. on April 2, 2021 with her eldest daughter, Diana, at her side. Pippa was a longtime resident of SaddleBrooke. She was born in 1935 in New York City and spent her early life in Miami, Fla. and Taunton, Mass. Upon graduation from high school, at age 17, she departed for New York City to pursue her lifelong passion for ballet and for dance generally. Over the years, she appeared in many dance and theater productions in New York, as well as in summer stock where she met her husband Ken, an actor and later a director for ABC television. Following the birth of their first child, Pippa and Ken relocated to Montvale, N.J. where they raised their four children. During those years, Pippa continued to be involved in dancing, including the operation of a dance studio. Upon their retirement, Pippa and Ken settled in SaddleBrooke where she lived until recently. In SaddleBrooke, Pippa’s favorite pursuits and loves were the Hula and English Country Dance groups.

Pippa was predeceased by Ken in 2007. She is survived by her brother, Philip Simpson of SaddleBrooke; Bruce McEwen and his wife Sophie of Chanteloup en Brie, France; Diana Stuart of Venice, Fla.; Kathryn McEwen of Toms River, N.J.; and Gwynne McEwen of Harrington Park, N.J. She also leaves nine grandchildren.