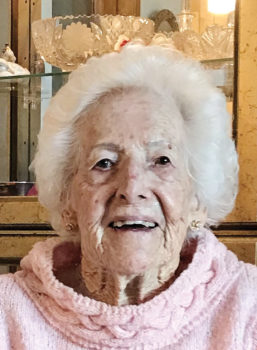 Marjorie Darlene Eliason Lundstrom Bergmeier of SaddleBrooke and Oro Valley, Ariz., passed away in Lake Oswego, Ore. on Friday, May 29, 2020. For nearly 100 years, she lived an incredible life and leaves behind many friends and family members. A native Nebraskan, Darlene was the daughter of Frank and Nettie Steinmeyer, born on Aug. 30, 1920, at the family farm near Clatonia, Neb. She was a determined individual, and with a twinkle in her eye, she would say that she was the valedictorian of her high school class of eight. As the Depression wrought its hardships on families and individuals, Darlene worked multiple jobs to pay her way through college at the “Harvard of the Plains,” the University of Nebraska.

World War II interrupted her educational goals, as did her marriage in 1947 to Raymond Eliason. While Ray worked for AT&T and Western Electric in Omaha, Darlene raised the couple’s two children: Chuck and Marjorie. Eventually, Darlene rejoined the workforce and took a position working for the Westside/District 66 School Administration and the Omaha Rotary Club.

Ray was diagnosed with lung cancer and passed away in 1971. As a widowed mother of two, Darlene worked full-time and saw to it that her children would continue to college. Around the same time, she decided that like her two children, she would continue to pursue her own college degree that World War II had interrupted. In 1973, Darlene left the Westside School District to work as the Executive Secretary of the downtown Omaha Rotary Club, and also began taking college classes to pursue a degree in Business and Home Economics, which she successfully achieved in December 1975.

In December 1975, Darlene married Dr. Glenn Lundstrom of Grand Island. He died in 1991. In 1996, a high school boyfriend found Darlene via the internet, which led to her marriage to Ken Bergmeier in 1997. She was a member of St. Timothy’s Lutheran Church in Omaha, and the Shepherd of the Hills Lutheran Church in Tucson. After retiring, Darlene and Ken Bergmeier resided in SaddleBrooke and were active in the SaddleBrooke community for nearly 20 years, before moving to Fair Winds in Oro Valley.

Her interests included family, baking, sewing, reading, golf, and playing bridge. She volunteered for many organizations and activities and leaves behind many friends and family across the country.

In the past few weeks, the whole family has enjoyed the numerous cards filled with kind words and fun stories about my Mom, Darlene Bergmeier. At this time when we are unable to have a funeral, these personal notes have provided the memory exchange which is so meaningful. Thank you all! 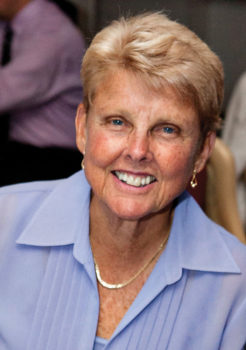 On June 16, family and friends lost a shining star. Many words describe this remarkable woman: matriarch, selfless, and determined are just a few. Mary was the center of her family, making sure everyone else was doing well. She had lifelong friends in Chester County (Pa.) where she had lived for 50 years, as well as in Tucson over the last decade. Her love of others included serving as a hospice caregiver in Pennsylvania and making regular contributions to the Golden Goose (Catalina, Ariz.). Despite several health hurdles over the years, Mary was determined to overcome. She was fiercely strong on the inside and gently gracious on the outside. In addition to family and friends, her interests were golf, walking, arts & craft fairs, swimming, the beach, puzzling, playing Skip-Bo, making Christmas cookies, hosting family reunions, and eating peanut M&M’s, jelly beans, Goldfish crackers, and pretzel rods. Mary is survived by her loving husband Pat; son Rick and wife Barb, and their children Brooke and Mitchell and his wife Stacey; daughter-in-law Paula and her daughter Madison; sister Kathy and her daughters Carolyn (and family) and Karen; as well as niece and nephews Karen, Bob, and Craig (and families). She was preceded in death by her son Doug. The light that shined brightly in Mary lives on in all who knew her. In lieu of flowers, please consider contributing to the Golden Goose, the National Parks Conservation Assoc., or the Arizona-Sonora Desert Museum.

Betty Jean Jacob of SaddleBrooke, Ariz. died May 28, 2020, at the age of 86 years. Betty was born July 9, 1933, in Greenfield, Iowa. Activities and hobbies enjoyed included golf, music, and dancing. She was a loving mom, a good friend and neighbor, and will be missed. Survivors: Cathy Jacob, daughter, of Appleton, Wis.; Stephen (Denise) Jacob, son, of Racine, Wis.; Jim (Mary) Eckardt, brother, of Rossmore, Calif.; Stephen (Marillyn) Eckardt, brother, of Boise, Idaho; Mike (Robin) Eckardt, brother, of Bellflower, Calif.; Billy Tyre, special friend, of SaddleBrooke, Ariz. Private ceremony to be held at a later date. Contributions may be made to the Democratic National Committee. Arrangements by Neptune Society.