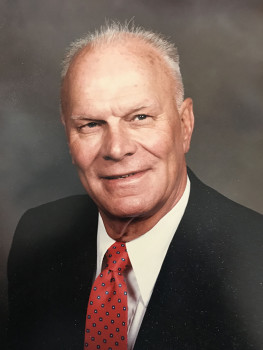 On January 6, 2016, Franklin T. Bethel died at the age of 91 after a quick bout of pneumonia following a hip fracture.

Frank loved music, playing trombone in the big band era and passed that love on to his children and grandchildren.

Frank earned his Bachelor of Mining Engineering degree from Ohio State University and a Master of Science degree from Penn State University. He worked as a petroleum engineer for Shell Oil Company for 29 years in the western United States, New York and Europe before retiring in 1982.

Frank and Jean Bethel moved to SaddleBrooke in 1990 living first on Birdie Drive and then E. Emerald Ridge. Frank served on the SaddleBrooke Board of Directors for several years and chaired the Finance Committee. He and Jean loved to travel and remember one special cruise when they met a number of SaddleBrooke residents.

He is survived by his wife Jean Bethel, four children, five grandchildren and five great-grandchildren. In lieu of flowers, anyone desiring to remember Frank is invited to make a donation to The Boys Town organization, 200 Flanagan Boulevard, Boys Town, Nebraska 68010 (www.boystown.org), one of Frank’s favorite charities.

He will be missed by many!