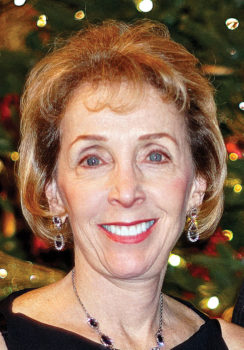 The ILR is proud to introduce Fran Berman, a new instructor for the Institute for Learning in Retirement. A Boston native, she attended grades seven through twelve at the Girls’ Latin School in Boston. While in high school, she studied Latin as well as Greek and Roman mythology. Fran attended the University of Massachusetts Boston and participated in its year abroad program at the Sorbonne in Paris where she earned her Diplôme Annuel. She graduated with a B.A. degree in French and Mathematics in 1971.

After two years of teaching French and Spanish at John Glenn Junior High School in Bedford, MA, she left education, moved to southern California, and turned to a successful 30-year business career in sales, marketing and corporate training in the computer industry. During that time, she earned an MBA degree at the University of Redlands in 1992. For almost 20 years before retiring to SaddleBrooke in 2009, she ran her own business as a motivational speaker and seminar leader focusing on business writing, project management and adult professional development.

Her love of Greek and Roman mythology and their influences on the arts and science largely grew from her studies at the Girls’ Latin School and her travels through Western Europe. Fran enjoys sharing that love and will be teaching an ILR course in the 2019 spring term entitled “Greek and Roman Mythology in the Arts and Science.” This exciting course will introduce students to the mythology of these two ancient civilizations, and famous paintings, sculptures, classical literature and astronomy inspired by them.

Fran and her husband Joe Vidmar have been married for 36 years and they totally enjoy SaddleBrooke. In her spare time, Fran plays pickleball, attends fitness classes, has been actively involved in her unit and SaddleBrooke One and volunteers for non-profit organizations in SaddleBrooke. The ILR welcomes Fran Berman to our faculty. For more information about the Institute for Learning in Retirement go to SBilr.org. 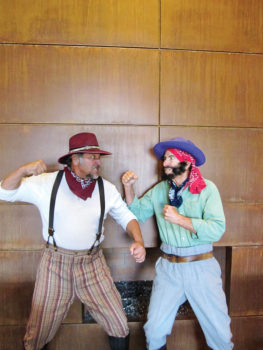 This past term Mike Carran taught an ILR class on “The Adventures of Huckleberry Finn.” The class was visited by two keelboat men, David Fuller (aka Sudden Death and General Desolation) and Tim Morsani (aka The Pet Child of Calamity). Twain included the scene to show frontier keelboat language and behavior in the days before the steam driven riverboats came to dominate travel along the Mississippi.

Fuller and Morsani, both veteran actors, played two keelboat men anxious to get into a fight. Fortunately, one is a cowardly braggart and the other is happy that he has that personality. As they rip and roar about how frightening they are, they slowly almost strike one another and edge away from the fight. Both men decide they need to find the jug they were both indulging from before the fight began. The class members totally enjoyed the class entertainment that Fuller and Morsani provided. For more information about ILR classes  go to SBILR.org. 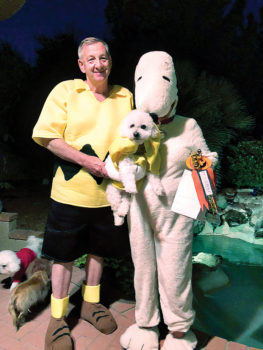 Friday, October 26 thirty people and 16 doggies gathered at the home of Ron and Debra Gryniewicz. The guests enjoyed a costume parade, tricks and treats, food, a dog trivia game and awards and prizes. The judges were Barbara Cox and Kathy Bush. Awards were presented for:

Funniest: Noelle as Woodstock with owners Tammy as Snoopy and Chuck Brown as Charlie Brown.

Most original: went to Josie “monkey on my back” owned by Sylvia and Dan Prokop.

In the Storybook category: Marley won as Paddington Bear with owners Ken and Diane Kirstine back just in time for the party.

Best Overall (in show): Daisey, the pug, clad as a Hawaiian Hoola girl complete with coconut bra with mommy, Susan Southworth, in full Hawaiian dress. They are transplants from Hawaii to SaddleBrooke a few years ago.

After parading and prizes, pooped pooches snacked on treats while their owners played trivia.