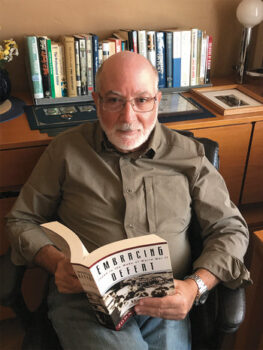 The Institute for Learning in Retirement (ILR) is proud to introduce Lieutenant Colonel Mark R. Schwartz, USAF (retired) as an instructor for the ILR program. Mark was born in Columbus, Ohio in 1951 and grew up in the Columbus area. He attended Ohio State University, where he earned a bachelor’s degree in political science in 1973. While at OSU, he joined the Air Force ROTC program, and at graduation, Mark was honored as a distinguished Air Force ROTC graduate.

Mark retired to SaddleBrooke in 2014 from Alexandria, Va. and is enjoying the many amenities available in SaddleBrooke, including the ILR. He has taught four ILR courses on U.S. political-military events in the 20th century. He has also taught similar courses for Osher Lifelong Learning Institute and the Utah State University summer citizen program. In his spare time, Mark enjoys writing historical fiction novels, hiking in the Arizona mountains, drawing, and oil painting. On his more serious side, he is a speaker for local foreign policy groups, military groups, and museums. He also participates in a number of troop support activities.

The ILR is pleased to have Mark Schwartz on the ILR faculty and looks forward to his further academic contributions to our community. For more information on the ILR, go to sbilr.org.