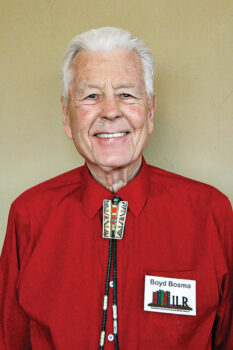 The Institute for Learning in Retirement (ILR) is proud to have Dr. Boyd Bosma as a member of the ILR Board of Directors and as an instructor. Boyd was born in Muskegon, Michigan and grew up in that area. He earned a B.A. degree at the University of Michigan, and a Master’s and Doctorate degree in Education from Wayne State University. In addition to his teaching experience, he held many leadership positions in the Michigan and National Education Associations (NEA). To further pursue his interests in education and human rights he joined the staff of the NEA in Washington D C in 1968. During his tenure of over 40 years with the NEA as a teacher, leader and staff member Boyd specialized in human and civil rights issues and led efforts by major national organizations and federal agencies on significant issues such as child abuse, corporal punishment, sex discrimination, substance abuse, affirmative action, equal educational opportunity, school desegregation, and extremist organizations.

Boyd has published numerous professional papers in his field and received the “Human Rights Award” from the United States Committee for the United Nations. Dr. Bosma is truly a remarkable man and educator with many talents. He has dedicated most of his life to the improvement of people’s welfare.

Boyd has taught a number of courses for the ILR, and spoken to the Great Decisions group and the Freethinkers. In the next ILR term (Feb. 13–March 19) Boyd will be teaching an in-depth course entitled “China and America: Facing New Economic, Political, and Diplomatic Challenges”. This course will help his students better understand the history of China and issues that have led to current relations between the United States and China.

Boyd and Madeline have been married for 46 years and moved to SaddleBrooke in 1996. They are both active in many local clubs and organizations. In Boyd’s spare time he is a family man and has six children, eight grandchildren, and three great-grandchildren. Madeline and Boyd love to travel and have visited over 130 countries around the world including multiple trips to China to better understand the people, their culture and their leaders. It is a pleasure to have Dr. Bosma as part of the SaddleBrooke ILR and sharing his knowledge with all of us.