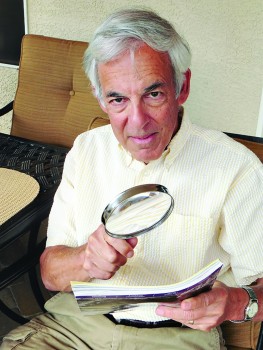 The ILR is proud to introduce Bart Epstein, an expert in criminalistics. I’m sure most of you have watched a TV program call CSI (Crime Scene Investigation). Well, Bart will be presenting a behind the scenes look at how forensic scientists use technology to help solve crimes. Bart’s course, entitled CSI SaddleBrooke, will be offered by the ILR in the November/December term.

Bart Epstein was born in Stockton, California. While he had many interests in his youth, when he went to college he decided that he wanted to be involved in solving crimes. In 1965 he earned a B.S. degree from the University of California at Berkeley in Criminalistics. He moved to Minnesota in 1966 and joined the Minnesota Bureau of Criminal Apprehension (BCA) as a Forensic Scientist. He worked in various positions at the BCA and retired in 1998 after 32 years of service. He ended his career at BCA as the Assistant Director of the Forensic Science Laboratory. Bart’s specialized expertise is in microscopy, serology and blood spatter interpretation. After retirement Bart served as an Adjunct Professor of Forensic Science at the St. Cloud State University.

Over the last 40 years Bart has also been a private forensic consultant for both prosecution and defense attorneys. He has participated in over 1500 legal cases in the U.S., Canada, New Zealand, Germany and the United Kingdom. His credits include teaching forensic workshops, presentations at professional meetings and publication of numerous scientific papers. Bart has recently co-published research using high speed video to study blood spatter mechanisms. Bart is certified as a “Diplomate” by the American Board of Criminalistics. It is with great pleasure that the ILR will have Bart Epstein sharing his knowledge and helping us to better understand the science behind crime solving. For more information on the ILR, go to www.sbilr.org