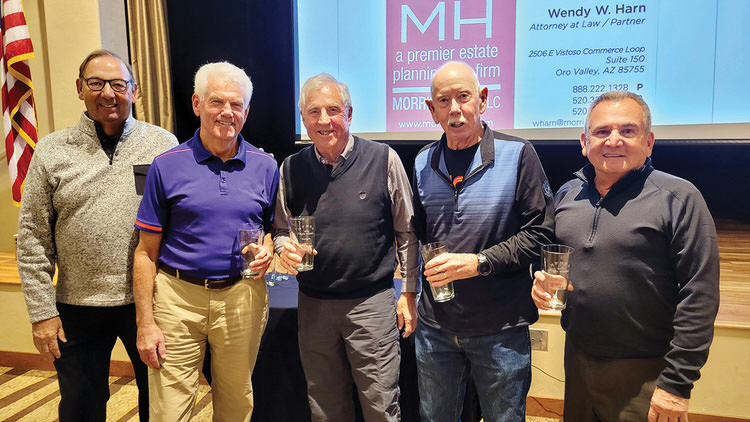 Ninety-two—that’s how many MountainView Preserve Men’s Golf Association (MPMGA) golfers teed it up in the annual Stampede, a (normally) two-day, four-man team event. Day one was held on Feb. 21 at the Preserve. Day two was scheduled for the 24th, but was canceled due to weather. (In the words of MPMGA President Dick Helms, it would have been a Stampede on ice.)

The 23 teams were separated into four flights based on handicaps. Day one was Rotating Partners, a format in which each of the four players teams up with one of the other three players for six assigned holes. Each two-man team within the foursome records their best net score, and it is added to the best net of the other two-man team.

Although day two (a Shamble) was canceled, all Stampede participants hoofed it over to the MountainView Ballroom for a nice burger buffet and an announcement of the winners. A highlight of the luncheon was an informative presentation by our guest sponsor, Wendy Harn of the Morris-Hall law firm. Wendy provided the group with a lot of helpful information about estate planning.

And the winning teams were:

Congratulations to all Stampede flight winners and especially to the overall winning team. Great job of leading the herd!