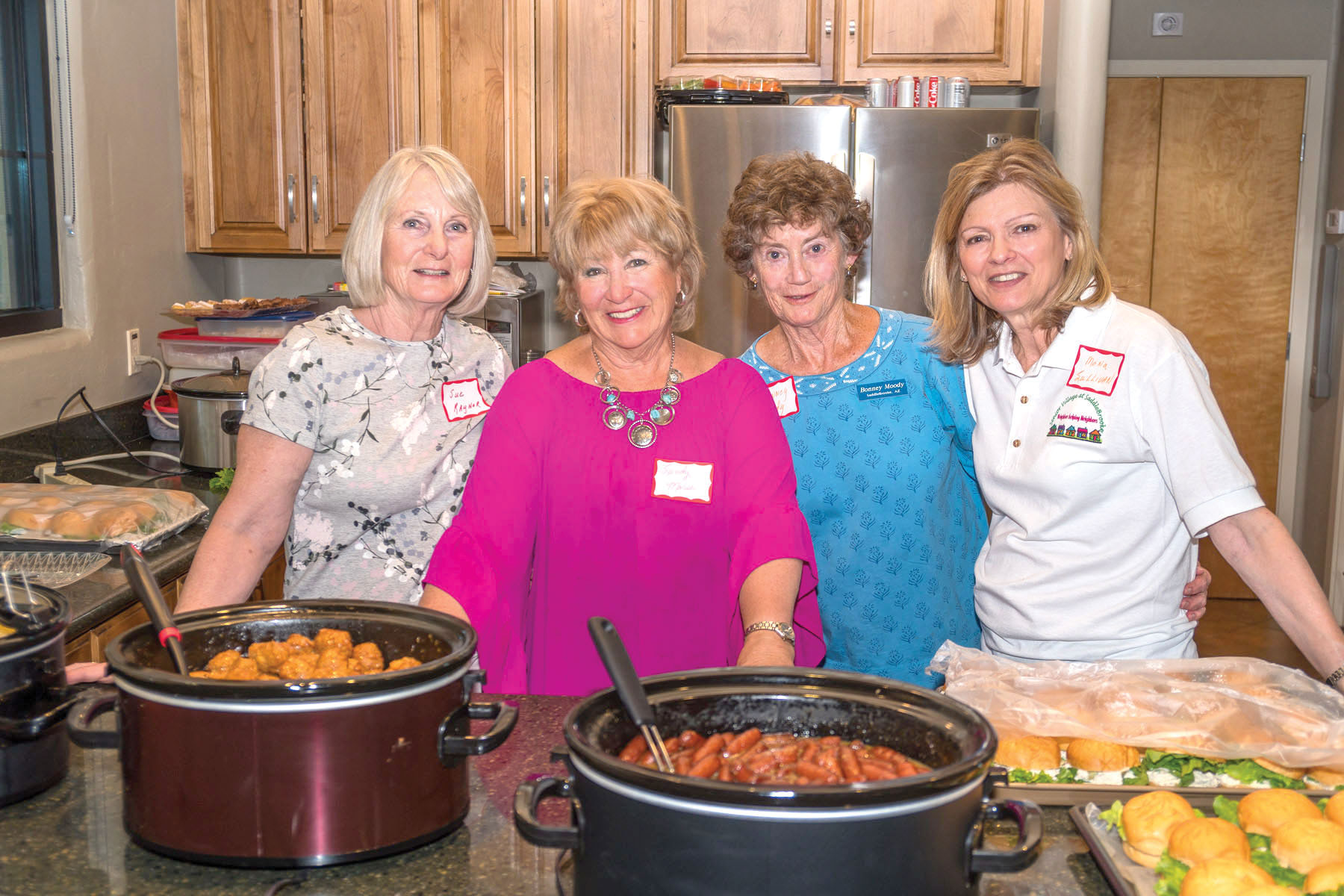 Stephanie Thomas
Once a year, the volunteers of Senior Village become guests of honor at a reception to thank them for the thousands of miles and hours they commit to serving the SaddleBrooke community. Starting on the patio of the Activity Center, they have a chance to mingle, sip wine and appetizers and get to know fellow volunteers from other teams before moving indoors to enjoy a tasty, assorted buffet.
For the third year in a row, Sandy Morse gathered her three energetic committee members to work out the party details. Weeks of planning, shopping and preparing by Sandy, Bonney Moody, Sue Rayner and Mona Sullivan climaxed in a fun-filled late afternoon. Colorful tablecloths added to the festive atmosphere with a chance for guests to win the plants that served as table decorations. Crockpots simmered with hot dishes and, as always, home-baked delectable brownies, cookies and lemon bars were a big hit.
As the 78 volunteer guests savored dessert treats, Senior Village president David Loendorf introduced Diane Ewing, the new Executive Director for the Village. Diane, along with Volunteer Coordinator Silke Bender, praised the volunteers for the services they perform and passed along the appreciation of all the members who rely on Village volunteers to take them to appointments and shop, make simple repairs in their homes and provide activities for social interaction.
Team leaders presented one-year service pins to the following volunteers: Judy Glenn, Lennie Good, Jerry Koelling, Pam Hoagland, Bonney Moody, Bill Moody, Phil Prass, Jay Hansen and Sue Jones from the Going My Way team; Ron Lenz, Bob Perez, Terry Sterling, Rick Waldorf, Gary Warren and Frank Lyons from the Helping Hands team; and Linda Bartholow, Barbara Russo-Sprouls and Margrit Wehrli from the Friendly Contact/Fun with Friends teams. Special recognition also went to these volunteers with less than one year of service but who have gone above and beyond in the number of member requests they have handled: Jan Maresca, Rob Peters and Ken Powers.
As a final gesture of appreciation, the Friday Quilters club donated handmade place mats and a brightly patterned quilt to be raffled. Anne Hammond was the surprised and grateful recipient of the quilt while Margrit Wehrli walked away with the mats.
Other helpers who pitched in with serving drinks, registering, setting up and taking down were Tom Borkovec, Don Prasek, David Loendorf, Stephanie Thomas, Lois Violanti, Peggy Ogier, Mardie Toney and Bill George.
Senior Village applauds each and every one of its 169 volunteers. You are the heart and hands of our non-profit organization. Thank you for reaching out and helping SaddleBrooke residents live more independently. To volunteer on a Village team or become a member,
call 520-314-1042.