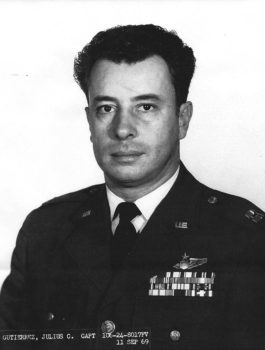 SaddleBrooke resident, Julius “Gute” Gutierrez, was one of 25 military veterans flying to Washington, D.C. on October 17. This is Gute’s military career.

In 1952 Gute enlisted in the United States Air Force as an Airman. He was 19 at the time. The next 20 years of Gute’s career were a mixture of assignments/training/classes all related to flying. One could say that his career in the U.S Air Force was anything but routine.

He enlisted in the U.S. Air Force in New York City in May 1952 and during his Basic Training at Samson Air Force Base in upstate New York he heard about the Aviation Cadet Program. He applied for the program and after much testing was accepted.

Upon completing Basic Training, Gute was assigned to James Connally AFB in Waco, Texas, as a payroll clerk. After a year at JCAFB he was transferred to Ellington AFB, Houston to attend Navigator School. It was there he earned his Navigator Wings and was commissioned a Second Lieutenant.

Gute then returned to Waco and was trained to be a Radar Observer. Completing that training he was shipped to Moody AFB in Valdosta, Georgia, for “back seat” radar training in the F-94C All Weather Interceptor. After qualifying as a Radar Observer it was off to Elmendorf AFB in Alaska where he flew in the new F-89D All Weather Interceptor. Alaska was not yet a state in the U.S.A.

It was in Alaska that Gute did some successful gold panning in his spare time. Gute struck gold in another sense as it was there he met his bride to be who was a Recreational and Occupational Therapist with the Red Cross. Gute’s future bride was Janelle R. Hill. They were married enroute to Pilot Training in Florida in November 1956. Gute is celebrating 60 years of wedded bliss.

It was near the end of his tour in Alaska when he was alerted for the thing he wanted most, his third Aeronautical Rating to become a pilot in the USAF! This led to his move from Alaska to Florida to a civilian pilot training base with civilian instructors. It was there he was checked out in the T-34 and T-28. After the training in the T-34 and T-28, Gute and his new bride moved to Big Spring, Texas, to Webb AFB for Advanced Jet training in the T-33. The pilot training was very intense but upon completion he received his coveted Pilot Wings.

After Texas, it was off to sunny Arizona to the Fighter Gunnery School at Williams AFB for training in the F-86F.

While at the Gunnery School at Williams AFB, there was an All Command Bulletin requesting volunteers for a new organization that would be called the Strategic Air Command (SAC). I’m sure everyone remembers SAC. Gute volunteered and was among the 2,000 pilots that were selected to be trained to fly a new airplane – a jet bomber, the B-47. It would be the first jet bomber in the U.S. Air Force. It had six jet engines and carried a crew of three – a pilot, co-pilot and navigator/bombardier and was designed to carry nuclear weapons.

Gute was scheduled to be transferred to Korea but assignment to SAC had a priority so he went to Wichita, Kansas, to begin a one year training course on the B-47. This would be strictly classroom study to get to know the new bomber from front to back. Before even seeing the bomber the proposed crews had to know every inch of the plane which was being delivered as they were studying and the squadrons were being formed.

Completing the one year academic course, and the crews assigned their airplanes, they started flying missions from Texas to Europe. The flights were ten hours long and required two refuelings enroute. The refueling process for the new jets was unlike regular refueling between planes. The new jets flew at altitudes between 33,000 and 35,000 feet and were much faster than the fuel tankers KC97s, which were prop jobs. In order for the tankers to keep up with the jets, they had to descend while refueling. To add to the complexity of refueling, these missions were flown at night with celestial navigation!

When the crews were in Europe they were combat ready and had to be in their airplanes within three minutes of when the siren sounded. The three-man crews were very close, as close as a three person family. They had to be as each one depended on the other to complete their missions. They spent up to 89 days on these missions before returning to Texas. Once back stateside they flew practice missions all over the states. The crews averaged flying 200 flying hours a year, the minimum to maintain flying proficiency This assignment to SAC lasted seven years.

After his seven year assignment with SAC, Gute volunteered for a different assignment with the newly formed Air Commandos whose mission was to train the Latin American Air Forces in counter-insurgency and anti-guerrilla warfare. A primary requisite was being bi-lingual in Spanish. He was sent to Hurlburt AFB in Florida to train in the B-26K airplane. When his training was completed he was assigned to a three year tour in Panama with the Air Commandos. Their mission was to train South American Air Forces to combat guerilla actions.

The next assignment was to Viet Nam where he was to be trained and fly the C-7, a specially modified cargo plane that was used to drop supplies to the troops on the ground. The training took place in Tennessee at Sewart Air Base in Smyra, Tennessee, and afterwards Gute was off to join the 536 TAS (Tactical Airlift Squadron) in Viet Nam. When his one year assignment in Viet Nam was over, Gute was reassigned to training on the C-141 Startlifter Training at Altus AFB in Oklahoma. After the training, his final assignment was to McChord AFB in Tacoma, Washington. He retired there in June 1972.

Gute’s strong desire to fly led to the multiple schools and assignments and his volunteering for different assignments, he managed to avoid the customary administrative positions that were requisite of a normal career. He was happiest while taking part in aerial flight.

If you wish to know more about Honor Flight Program, please go to www.honorflightsaz.org or call Jerry Lujan at 520-818-6264.