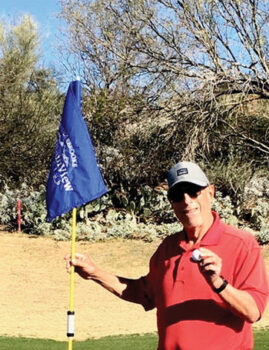 Dec. 30 was a once-in-a-decade kind of day for David Cohen. During a MountainView-Preserve Men’s Golf Association event, David put his tee shot in the cup on the par-3 fourth hole at MountainView.

David used a 4-hybrid to launch the shot to a difficult pin placement 150 yards away.

The other players in his foursome were Angelo Klousiadis, Rick Fernandez, and Scott Brewbaker. Angelo was the only one to see the ball go into the hole.

This was David’s third hole-in-one. He has now scored an ace in each of the past three decades. Congratulations, David. Try not to wait until 2030 to get that next one. 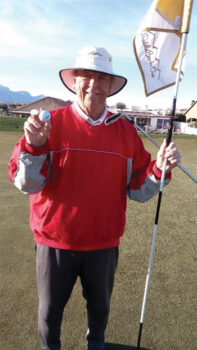 On Jan. 14, Paul Schmidt shot a hole-in-one on SaddleBrooke hole number 2. It was his first hole-in-one after 60 years of golf. After completion of his round, he added his score and realized that he shot his age (73) on his birthday! His witnesses are Jon Parkhill, Byron Jones, and David James.

Then, on Jan. 23, he shot his second hole-in-one on Catalina number 6, witnessed by Dan Ashley. 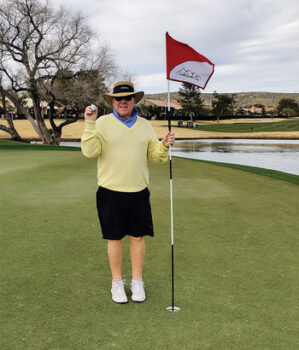 Wow! A fourth hole-in-one in SaddleBrooke!

On Jan. 15, Steve Schmidt shot his fourth hole-in-one on the SaddleBrooke course, hole  number 2. It was a beautiful, high, straight-at-the-stick shot. It hit behind the flag and drew back, right into the hole! A sand wedge was the club of choice.

So, Happy New Year! Or as the Irish say, Bhliain Nua Shona!