If you play golf at MountainView or The Preserve, you’ve surely seen Joe Sieverding’s friendly, smiling face. Sometimes he greets you on the first tee as the starter. Other times, he keeps an eye on things out on the course as a marshall.

But maybe you didn’t know that Joe also plays a bit of golf himself when he’s not working, and he plays it pretty well. On June 10, while competing in the MPMGA’s Summer Bash, Joe scored an ace on the 11th hole at the Preserve, a par-3 that measured 128 yards that day.

Joe launched a 9-iron over the deep bunker that guards the front of the green. The ball sailed on a good line toward the pin, which was positioned at the back of the green and not entirely visible. Two of his playing partners also hit pretty good shots. When they reached the green, they were surprised to see only two balls on the putting surface. Where was that other one? Joe was still looking around when one of the guys said, “Joe, you better go look in the hole.”

What Joe discovered was that he had just recorded his third hole-in-one. Joe achieved his first at the Elmwood Course in Sioux Falls, S.D., and then chalked up another one on the second hole at SaddleBrooke One’s Tucson course.

Congratulations, Joe! Now you have another good reason to smile.

In golf, a hole-in-one (also known as an ace) occurs when a ball hit from a tee box to start a hole ends up in the cup.

For almost a year, Paula Vogel’s husband, Rick, has been saying that, due to her determination and hard work, she would get a hole-in-one before him.

On June 15, his prediction came true when on The Preserve number 4 elevated tee, Paula had her first hole-in-one.

Paula has served on several MPLN special events committees. It has been a pleasure to have her be a part of MPLN with her enthusiasm and willingness to serve.

On May 14, pigs flew over hole number 6 at The Preserve as Judy Grow, Debbie McMullin, and Lori Stegink saw Ann Lange make her first hole-in-one. Just hoping to land on a green, dodge her usual 3-putt, and avoid posting a 6x on a par-3, Ann went hog-wild when Lori announced the ace from the tee box. While many women would have used a much shorter club for the measly 87-yard direct flight to the red flag, Ann used an 8-iron to accommodate for her usual layover on the hillside. The ball rooted and rutted around a bit before wobbling down towards the green on a path about as straight as a pig’s tail. You don’t have to be pretty if you’re lucky, and it still counts as a hole-in-one. Having never actually bonded with a particular golf ball, Ann was not sure what ball she had used, but it was probably an adopted ball from the ditch on the previous hole. Any ball that eventually makes its way to the hole has a happy home.

Ever since kindergarten, Ann has been trying to fit a small round object into a slightly larger round hole. It just goes to show that if one putters around long enough, any old golf galoot can slop one into the trough, and for just a nanosecond, mutate into a golf genius. Since it wasn’t a women’s league event, Ann didn’t bring home any bacon for her hole-in-one, but squealing rights were good enough. At the end of the round, faster than a hog outta hell, she cried “Wow, wow, wow!” all the way home to ham it up with her husband, Gary, the best ace she could ever have hoped for. 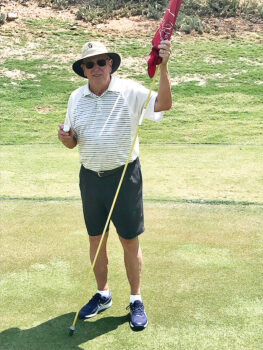 Pete Schwartz Celebrates the Summer Bash With a Hole-in-One

Getting a hole-in-one is never a ho-hum event, but for Pete Schwartz it’s not a totally new experience. On June 10, during the MPMGA’s Summer Bash, Pete recorded his third ace.

This one came on hole number 6 at The Preserve, a par 3 that requires an accurate, solid shot over an intimidating wash. On this day, Pete was up to the task. He smacked a 6-iron over the trouble and watched as his ball landed on the green and rolled toward the pin.

Pete and his playing partners couldn’t see exactly where the ball stopped, but they knew it was going to be close. When they parked their carts on the elevated path to the right of the green, they didn’t see his ball on the putting surface. They soon found it, however, resting at the bottom of the cup.

Could it get any better than that? Well, yes. The ball Pete was playing had been given to him by his granddaughter as a birthday gift. You might want to keep that one, Pete—what a great memento.

Pete’s previous two aces were scored on holes number 8 and number 17 at MountainView. Congratulations, Pete, and keep those aces coming.