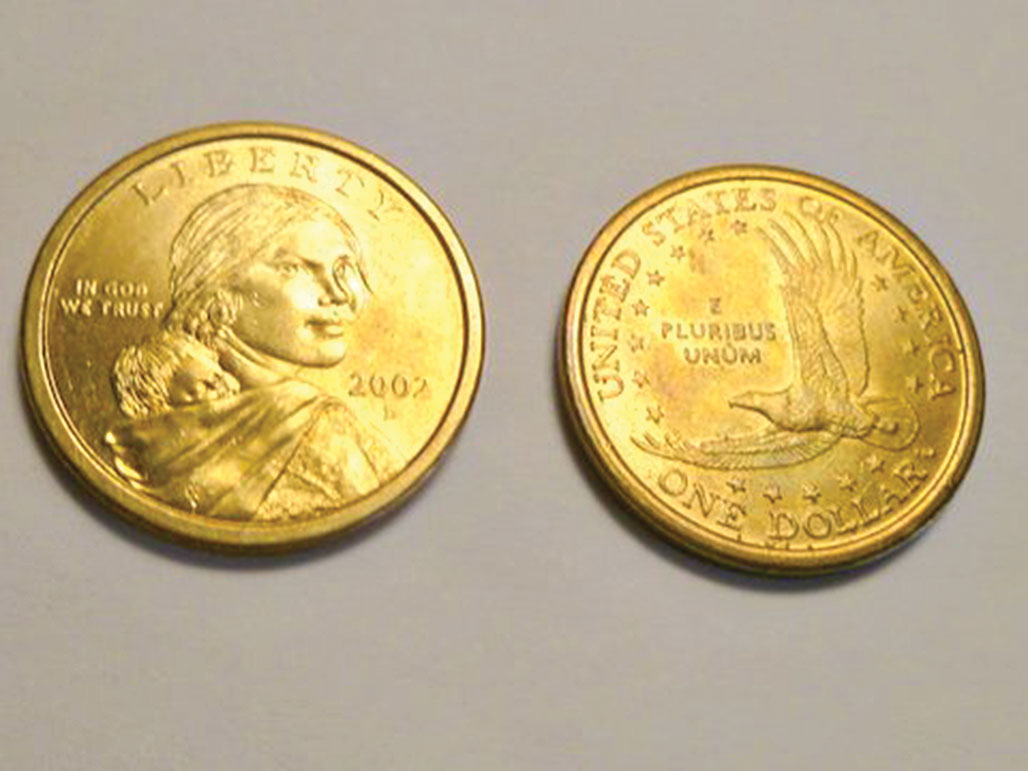 The Sacagawea Dollar (SD) was released in January 2000 to replace the Susan B. Anthony dollar coin. The SD is a beautiful coin honoring Sacagawea who played a key role in the Lewis and Clark expedition in 1804 to 1806. The life of Sacagawea is shrouded in mystery and bravery. She was born in 1788 as a Lemhi Shoshone American Indian. At the age of 11 she was kidnapped by a Hidatsa raiding party and later sold to Toussaint Charbonneau, a French-Canadian fur trader to become his wife. When Congress approved funds for the expedition ($2500), President Jefferson chose Captain Meriwether as its leader. Meriwether then selected another Army officer, William Clark, as his co-captain and hired Charbonneau as a guide only if he would bring Sacagawea. She was vital to the expedition as she knew the territory, spoke several Indian languages and taught the explorers how to find edible roots and plants. The goals of the expedition were to study and document the Native American tribes, plants, animals and geology and to find a direct waterway to the Pacific Ocean of this newly acquired land from France in 1803.

The expedition known as “the Corps of Discovery” departed from their camp near St. Louis, Missouri, on May 21, 1804, when Sacagawea was 15 years old and six months pregnant. Three months later the expedition wintered over in a fort in North Dakota where she gave birth to son, Jean Baptiste. It was in November 1805 the expedition reached the Pacific Ocean and established Fort Clatsop, near present day Astoria. Sacagawea continued the 3,000 mile round trip journey with her newborn son strapped to her back.

It was 196 years later that the Sacagawea Dollar was released to the public to honor the only woman on the Lewis and Clark expedition. This beautiful coin is a three-layered clad coin composed of a copper core (88.5%) sandwiched between outer layers of an alloy composed of 6% zinc, 3.5% manganese and 2% nickel. The obverse was designed by Glenna Goodacre and shows a ¾ profile of Sacagawea with Jean Baptiste on her back. The reverse was designed by Thomas D. Rogers, Sr. depicting a soaring bald eagle encircled by 17 stars symbolizing the state of the union in 1804. Circulation SD coins are minted at the Philadelphia and Denver mints. Proof sets containing a proof Sacagawea dollar are minted at the San Francisco mint. Starting in 2009 the SD series was renamed the Native American Gold Dollar and the reverse designs are changed each year to honor Native American people, history and culture. The Sacagawea dollar is a beautiful collection of coins and they are all affordable.

If you are interested in coin collecting, the SaddleBrooke Coin Club welcomes you. Our next meeting is Thursday, January 8, 2015, in the Sonoran Room in the MountainView Clubhouse from 7:00 to 9:00 p.m. For more information contact Ken at 520-825-1709 or [email protected]