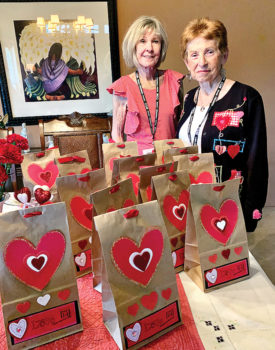 Although many of us celebrated Valentine’s Day on Feb. 14 by receiving cards, small gifts, dinners out, or flowers, the Catalina Timewalkers chapter of The Questers learned about the history of this special day a week later. Valentine’s Day history goes back many centuries. It was established as a fixed celebration on Feb. 14 by Pope Gelasius in the 5th century, and was celebrated either as a romantic or religious day.

The Catholic Church has had three priests that were elevated to saints; all three of whom were imprisoned and died as martyrs. There are many stories and legends about them. According to one legend, a Roman priest was arrested for performing secret marriages for the area soldiers, who were forbidden to marry. While imprisoned, he healed a jailer’s daughter and, as he was led to his death, he left the girl a note saying, “From your Valentine.” It is said that he handed out paper hearts to remind Christians of their love for God. The history has many stories about how and why St. Valentine’s Day is celebrated but it has always been affiliated with love.

Over the years and centuries, Valentine’s Day has been a religious or ancient ritual day, while in now it is a commercial holiday. Many countries around the world celebrate the day, but it’s not a holy day. The oldest Valentine’s Day message written in English was in 1474. Hallmark published the first card in 1890 and began mass production in 1916. It is the second largest card sale day, with Christmas being the first.

The Timewalkers meeting closed with members sharing some special gift or vintage card. Refreshments were provided by hostesses Gerry Burnside and Sandra Valenzuela. Also, each member received a special Valentine’s goodie bag made by Gerry and Sandy.

The Catalina Timewalkers welcome prospects and new members to any meeting. The purpose of Questers is to stimulate the appreciation of antiques and history through study and encourage the restoration and preservation of historic landmarks. The Timewalkers meet on the third Friday of the month from October through May. Contact Sandi Newberry at 520-818-0199, if you would like to attend a meeting or want some more information.