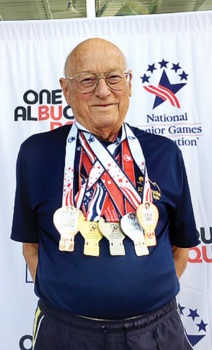 Harold Peter with his winning medals; Photo by Gisela Peter

The competition at these events is intense with athletes competing from all over the country including 48 states, the District of Columbia as well as Canada and Mexico; so, to earn a medal by being in the top three athletes of your age group is a significant accomplishment. Harold says this is a sport where everyone wants to be older, especially when you move into a new age group. Harold moved into the 85-89 age group and said that helped with the results, but he also swam his best times in most of the events so far this year. Coach Doug Springer said it was Harold’s best meet for the year! Harold earned gold in the 200 backstroke, silver in the 100 backstroke and 200 breaststroke, bronze in the 100 breaststroke, but he also received ribbons for fourth in the 50 breaststroke and fifth in the 50 backstroke. Harold said his events were spread out over three days with the 70 and older athletes competing each morning from 8:00 a.m.-noon. Then he would take it easy in the afternoon since he had to race again the next morning; so, he really didn’t roam around touring Albuquerque. He said the National Senior Games were well-organized, and they put on a very good show. He did say that the altitude affected him somewhat, but he was very happy with his results, as well he should be. Way to go, Harold!