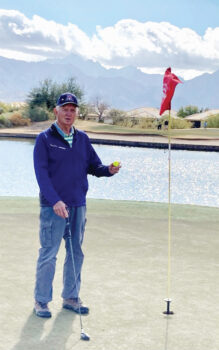 “Look what I found.” Gordon Elliott on hole number 8 at MountainView, after scoring a hole-in-one.

On Jan. 18, during the Member-Member Match Play Tournament, the contest was tight as Gordon Elliott and his group came to the 8th hole at MountainView, a 132-yard par 3.

Gordon grabbed his hybrid 5 club and launched the ball high and straight to the green.

“I think that’s headed to the hole,” one of his opponents said, which was quickly followed by, “It’s in!”

“No way,” Gordon said. He thought it might have rolled behind the pin and he just couldn’t see it.

When he arrived at the green, he thought, “Well, I’ll just walk by the hole and take a look.” Sure enough, there it was.

The shot was witnessed by his playing partner, Mike Miller, and his opponents, Eric Sensiba and Darryl Henderson.

“All the bars were closed, so I couldn’t buy drinks, but I think those guys will hold me to it,” Gordon said.

Gordon and Mike ended up losing the match on the last hole (which doesn’t seem right), but Gordon was a winner on number 8.

Congratulations to Gordon on his great hole-in-one, his second since moving to SaddleBrooke in 2013. His first was on number 11 at the Preserve. Well done, Gordon!