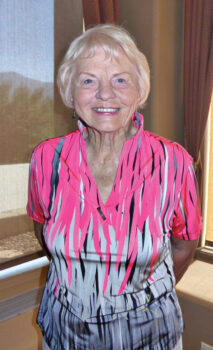 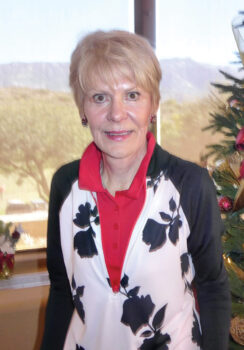 I want to apologize to last year’s Ace of Aces winner, Karen Wendlandt. She won Low Gross honors over the field with a score of 65, but her photo didn’t appear with her accolade.

Our SBWGA-18 honoree is Nancy Wyllie. Although she grew up in Illinois, this Scottish Danish gal now considers herself an Arizonan ever since she and her husband moved here in 1997. Like many, she didn’t know if she would like the desert, especially since she had to leave her horse behind, but she kept an open mind and got involved with the SBWGA right away. Although she hadn’t played much golf back east, she was determined to conquer the game. After all, her ancestors invented it. Right away she found new friends who loved the game and soon realized she loved it, too.

A short time later, Nancy discovered how small our world really is. She played with a new member and, as usually happens, the question of where they were from popped up. “I grew up in a place you probably never heard of,” Nancy said. “Me, too,” said Maggie Brown. “It’s a tiny little town, really.” Nancy said her hometown, Dwight, Illinois, was pretty small as well. “That’s crazy, I grew up in Dwight,” Maggie laughed. Maggie is a few years older than Nancy, and it’s likely the reason they never met, but they went to the same high school and the same college. The most amazing part is that their backyards touched.

Nancy never tires of meeting new people from all over the world. “It’s wonderful to share experiences and learn about places I’ve never been. One of the best things about SaddleBrooke is that I can meet someone new nearly every day.”

Nancy’s first job with the organization was assistant to the membership chair and she then took over stewardship of Kachina. She assumed the role of Vice President, then moved to the President’s chair in 2005. An unexpected event kept her there through 2006, but she insisted it wasn’t a burden. In fact, she loved every minute of it and would gladly do it again. A special achievement was winning the Cactus Classic.

Nancy has served on numerous committees such as decorations and registration and she enjoyed them all. She’s continually amazed at the wide range of talent in SaddleBrooke and that so many residents are ready to share their knowledge and expertise. It’s been said before, and Nancy agrees, that SaddleBrooke is truly unique.

Sure, there’s been a challenge or two along the way. However, having been a first-grade teacher, Nancy knows how to convince others to play well together.

She loves having 27 holes to choose from and wouldn’t change a thing about them, except, well maybe the second on SaddleBrooke..