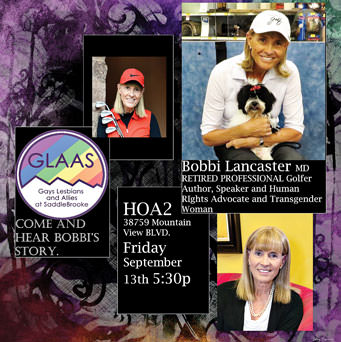 Dr. Bobbi Lancaster is a 69-year-old beloved family physician, retired professional golfer, author, local, national and international speaker and human rights advocate. She was once Robbie (a “he”), but now she is Bobbi, a transgender woman. Robbie (he) was a champion amateur golfer, family doctor, married a woman, who with Bobbi are proud parents of three children. On the surface, Robbie had the so-called perfect life, but the yearning to live as Bobbi (she) resulted in a private life of hopelessness and severe depression. After a suicide attempt, Robbie finally accepted his transgender nature and realized that it was imperative to live a true and authentic life. Ultimately, Bobbi emerged in 2012. She has since leveraged her international celebrity status to advocate for the beleaguered transgender community. She has been the focus of multiple print interviews, talk radio and documentaries produced by NBC/Golf Channel, Sports Illustrated, the Cronkite School of Journalism, participated in a White House Summit and has lobbied on Capitol Hill for transgender acceptance and equality.