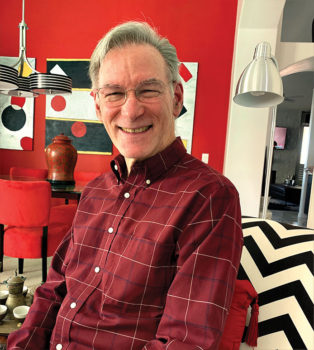 Perry Shapiro moved to SaddleBrooke four years ago. Prior to moving, Perry owned and operated “Panache Hair Designs,” a salon in southern New Jersey for over 30 years (the famous Jersey Shore). Perry has always believed that one who receives much has a duty to “give back.” Perry served on the board of the South Jersey AIDS Alliance and also volunteered at the Ruth Newman Shapiro Cancer Fund, a prominent charity in New Jersey dedicated to the fight against cancer.

After his move to SaddleBrooke, Perry continued with his dedication to community service. He volunteers for SaddleBrooke Outreach and also, he is active on the SaddleBrooke Home Tour Committee. This year Perry will be in charge of the 40-50 volunteer docents on the Home Tour. Docents are tasked with explaining and overseeing the particular homes on the tour, including keeping a careful eye on each of the homes to prevent damage or theft. Their job is critical to the success of the tour.

Now in retirement, Perry is able to enjoy all the things that he never had time for and he is busy creating a social environment that allows him, a single gay man, to thrive here in SaddleBrooke.

Perry is a strong supporter of GLAAS and is looking forward to another wonderful year for our organization.

March 8 details to be announced

All of the above events are at the SaddleBrooke One Activity Center from 5:30-9:00 p.m.

GLAAS stands for Gays, Lesbians and Allies at SaddleBrooke. Its mission is to use the “power of community and camaraderie to celebrate the lives of gays, lesbians and their allies.” You do not have to be gay or lesbian to be a member of GLAAS. Many of our members are allies, who have gay and lesbian friends and family. And some of our allies have not known any lesbian or gay people until recently but are interested in being supportive. GLAAS usually meets on the third Friday of the month.